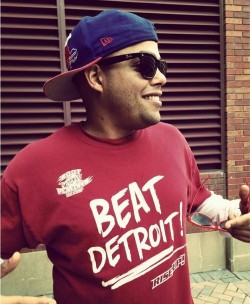 
Welcome to the 30th edition of Free Music Friday brought to you by BuffaloVibe!  It's a bittersweet occasion, as this week also saw the passing of hip-hop legend, Phife Dawg, of A Tribe Called Quest.  I still have vivid… more »


Happy St. Patty's day/March Madness, Buffalo!  I hope this FMF finds you well and that your brackets are still in order after day one of the tourny.  Unfortunately for me, the Purdue loss crushed my bracket and my dreams… more »


Good Afternoon, Buffalo!  I hope this Free Music Friday finds you well!  During a week where King Kendrick once again seemingly overshadowed the entire music industry with his sheer brilliance ( if you don't know what… more »


What's good Buffalo!?  We've got some great news for you as we've decided to bring back "Free Music Fridays!"  In case you've forgotten, or were never privy in the first place; the purpose of Free Music Friday is to… more »


Another Friday is upon us and it's FMF time again.  The weekend is almost here! Why not celebrate with some free music? Mecca 83 - Ain't Done Too Bad Manchester based producer Mecca 83 dropped this album To celebrate… more »


Happy Friday, Buffalo!  I know it's been a few weeks and I shouldn't have left you, but between being stuck under 6 feet of snow and the holidays, there just wasn't a whole lot of time for free music.  Blasphemous,… more »


Happy Friday, Buffalo.  I wish I could be more excited about the coming weekend, but that loss to the Dolphins has me feeling down and out.  I was just starting to think we were finally gonna end the drought this year,… more »


Welcome to another FMF Monday edition!  This week we have some exquisite free music for you in the form of a few outstanding collaborations, as well as a live set by an autotune-less T-Pain.  So what better way to enjoy… more »


It's free music Friday time! We've got some great music to share with you this week - from fresh new visuals by local bands to new single releases from huge national recording artists, you're sure to… more »


Happy Friday, Buffalo!  It's FMF time again, and, as always we have some great music lined up for your listening enjoyment. So scroll down, find something you like, and click play.  What better way to bring in the… more »


Happy autumn, Buffalo! Last week's Bills loss brought with it a painful reminder of expectations vs reality. We were all riding high after two wins and an early hold on first place in the division, but a loss quickly… more »


What a week it's been for our city; The Bills go into Chicago as huge underdogs and pull off the upset, Jim Kelly is cancer free, and the Pegula Family just bought our beloved football franchise, solidifying the team's… more »


It's Friday!!  I've managed to put the sticks down and take a break from Madden for long enough to bring you a fresh new FMF, because if there's one thing I love more than football - it's music. … more »


FMF time!  We know you're itching to get through the waning hours of the work week and on to your weekend, so we're here to facilitate that for you with some great music that's as easy on your ears as it is your… more »


Happy Monday, Buffalo!  Please excuse my absence as I was out last week and unable to bless you with the free music that we have all come to know and love - I hope you can find it in your heart to forgive me. FMF is back… more »


What's good Buffalo? Another Friday is upon us, and, as always, we've got some great free music for your listening pleasure.  Be it rap, rock, jazz, or South American rhythms, this week's episode is full of gems… more »


The Albrights released their self-titled, sophomore album over the weekend. Since the release of their debut album Ask, Tell in 2011, the band's unique blend of infectious sounds have garnered plenty of attention… more »


The weekend is just around the corner, and as always we've perused the internet to bring you some great free music. From up-and-coming local bands to world renowned producers, this week's FMF has a variety of music to… more »


Happy Birthday, America! It's hard to believe you're 238 years old already. Though I am well aware of your bloody history, and have lost all faith in the ability of your leaders to serve your citizens, I still love you, and will… more »


Happy Friday Buffalo, and congratulations on making it through another week.  Like always, we've got some great music for your ears in this edition of FMF; so #VibeWithUs while you're counting down the minutes to the weekend.… more »


Happy FMF, Buffalo! We've got some great free music for you to enjoy during this beautiful weekend.   Unforeseen circumstances have me typing this week's FMF on a Mac and it feels like I've never used a computer before.   It's… more »


Memorial Day weekend has come and gone, bringing with it the official start of grilling season/unofficial beginning of summer here in WNY.  This is our tenth go at FMF, and we've got a solid line up for you.  So while… more »


Fatima - Yellow MemoriesUp and coming R&B singer, Fatima, released her debut album this week and it's an all around solid record featuring diverse sounds from some notable producers (Oh No, Scoop DeVille).  Stream it… more »


TGIF!  We've got some great new music lined up for you, including a new video from Buffalo's very own, Chae Hawk.   I don't know about you, but I'm so sick of hearing about the Donald Sterling fiasco.  If you take… more »


Life is good.  Music makes it better.  Click the links and enjoy! The Black Keys - Turn Blue The  Akron duo recently released the second single from their upcoming album of the same name.  It's a lot smoother… more »


Good afternoon, Buffalo!  I know you're probably itching to get out and enjoy this wonderful weekend weather, but if you're like most of us - you're probably stuck somewhere behind a desk for the next few hours.  Not… more »


"One good thing about music, when it hits you, you feel no pain." -Bob Marley It's been a trying week for us Buffalonians - sports fans especially.  Gone is the man responsible for bringing professional football to the Queen… more »


What's good, Buffalo!?  We've made it through another week and another crazy snow storm.  It looks like some decent weather is finally on the way and we've got some great free music lined up to help  you melt away… more »


Another Friday is upon us, so you know what that means.  For those who haven't been paying attention, every Friday we've been providing links to music from all over the internet with the sole purpose of blessing you with… more »


Happy Friday!  It's hard to believe another week has already gone by.  Today we have something special lined up for you besides just the best free music that's floating around out there in cyberspace.  With this… more »


One of our goals here at Buffalo Vibe is to keep you, the reader, updated with what's fresh and current on the music scene.  The amount of information on the internet, like the universe, is vast and ever expanding. … more »

Buffalo's Fashion Forward with I Am Style


On Thursday evening December 12, 2013, the Waiting Room on Delaware Avenue will be hosting I Am Style : Buffalo's first ever official underground fashion show. The show is being presented by Pandamonium Entertainment in collaboration… more »


It’s been three years since a certain Detroit rapper has released a solo studio album, and his latest effort just might be the best hip hop album of 2013 (hint: it’s not Eminem). Black Milk’s superiority as… more »

Album Review: Elvis Costello & The Roots - Wise Up Ghost and Other Songs


What do you get when you take one of the most significant singer/songwriters of the past three decades, and pair him with perhaps the greatest live hip hop band of all time? Elvis Costello and the Legendary Roots Crew have collaborated… more »


The corner of Allen and College Streets has recently undergone an aesthetic transformation thanks to the Allen Street Street Art Collective, a project funded by local entrepreneur and arts supporter, Mark Goldman. The ASSAC seeks… more »


Remember those jumbo coloring/activity books we all enjoyed so much when we were younger? Thanks to Bun B and Shea Serrano, we can take a trip back to our childhoods with their newly released, rap-themed coloring and activity… more »


The Arctic Monkeys recently released their fifth studio album, AM, to heavy critical praise, and for good reason; it’s a very solid album. AM marks a slight departure in style from their earlier work as the band continues… more »


Summer’s almost gone, but what better to help ease the sting of shorter days and colder nights than football? For many gamers, besides the obvious excitement over the NFL kicking off again, the impending season means one… more »