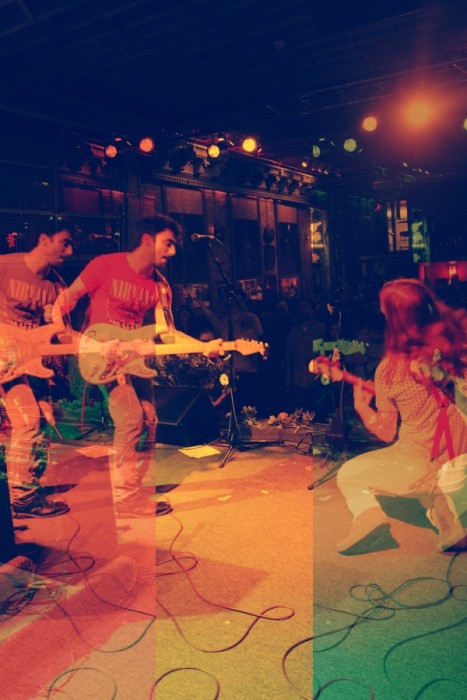 More from the album release show
- Share this page -
The Albrights released their self-titled, sophomore album over the weekend. Since the release of their debut album Ask, Tell in 2011, the band's unique blend of infectious sounds have garnered plenty of attention and praise from the local music scene. Their latest effort continues to build in that tradition, offering an intriguing mix of various music genres over 13 tracks.

The opening, "Gotta Be Your Own Friend" sets the tone for the album with melodic keys and upbeat guitar riffs while the narrator urges a friend to reclaim her identity that has been lost due to her being in a relationship with a controlling guy. The following track, "Pretty Flower" is quite catchy with an interesting structure that seemingly blurs the line between verse and chorus. I know this doesn't exactly make sense, but it's hard to explain so you'll either just have to take my word for it or listen for yourself.

"Soundwave," the album's first single, is a playful love song that features layered vocals over melodic piano keys and triumphant horns. The band continues to show of their musical chops and knack for combining different genres with "Wolf Gang Blues," a fusion of folk/bluegrass guitar strumming over rag-time piano. See their VibeSession of "Wolf Gang Blues" here.
About a third of the way through, the album takes a more solemn turn as the tempo slows down, and the content becomes a bit more bleak. With lyrics like "Chop me down like I'm a tree/Cut me like a surgeon" on "Virgin," which features heavy guitar riffs, a trumpet melody, and call & response that is reminiscent of Cake's sound. "Zion Man,"  one of the records highlights, opens with Chopin-like piano keys, and contains some of the more poetic and socially conscious lyrics on the album: "Karma can sometimes be deceiving in a caste."
The mood lightens up once more over the final third of the album, which offers even more surprises. "Handle This" starts off with an extremely smooth, jazzy instrumental that quickly, and without warning, transforms into a pop-rock ballad. The cheerful "Baby It's You" is a fast paced ode to a significant other with country and blues elements, while  "Goodbye, Adeline," the albums slow, somber closer is a regretful eulogy from a man who killed his wife for being unfaithful and now misses her.
This was my first time listening to The Albrights and I really enjoyed the experience. Just when I thought I had a firm grasp on their "sound," they would switch it up, which is very refreshing. The band's ability to blend many genres of music while still sounding unified is, in essence, where the brilliance of the album lies. It's diverse without sounding disoriented; cohesive without sounding monotonous.
The album is available on the band's bandcamp. Also, check out their video for "Soundwave" below as well as their VibeSession of "Honey."

Alex is a Buffalo native and featured music contributor to BuffaloVibe.
Advertise With Us
- Featured Event -
Sat Oct 17th