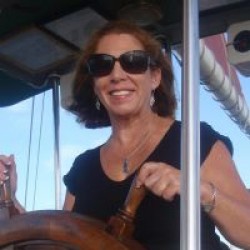 There are few people more passionate about Buffalo than Marti Gorman. It took her 32 years to find her way home, but she’s here now and is driven to make a difference in her hometown.

More than 30 years of experience as a freelance writer, editor, translator and publisher. Currently publishing beautiful books about Buffalo, New York (www.BuffaloHeritage.com), and promoting this region as one of the best kept secrets in the nation via Buffalo By Choice, BuffaloVibe.com and the Buffalo Citybration weekly e-newsletter.


A long time ago in a galaxy far far away, Mandy Bailey was a French teacher, continuously talking about food en français. She worked restaurant and catering gigs during her college days and started Bacon & Bakin’… more »


Review by Kevin M. Cox Lanford Wilson’s Pulitzer Prize-winning (1980) play, Talley’s Folly, opened this week at The Jewish Repertory Theatre, proving once again to be timeless and powerful. The set is a strikingly… more »


"Buffalo, NY is known across the country for its eponymous spicy wings. But while the rest of America has spent the past several decades gobbling down the Buffalo wings that put the city on the culinary map, locals have been… more »


John Paget has done it again! His latest Beautiful Buffalo video, produced for Visit Buffalo Niagara (VBN), captures the essence of why we love this place. Using time-lapse video of some of the Queen City's many recent… more »

I Am Finally Riding


For more than a decade I could not do the Ride for Roswell. Not because I was physically unable, but because I was otherwise engaged that weekend--every year. Yep. The Ride takes place the third weekend in June, the same weekend… more »


The parade of picnics and scent of hot Italian sausage on the grill threatens each year to obscure the meaning of Memorial Day. We've stretched this solemn ceremony into a three day holiday that signifies the start of summer.… more »

A Dozen of My Favorite Courtyards and Patios


The lilacs are in bloom, the sun is bright, and it's not dark until nearly 9:00pm. Why in the world would you eat indoors? My dining preferences from now until well after Labor Day are all al fresco. Other than your own back… more »


It was Sunday, May 10, 2015. My mother's smile lit up my life. She had suffered mutliple strokes and was confined to a wheelchair and a nursing home. She was eating very little, wasting away before my eyes. She had been deaf… more »


In a city full of festivals, the Buffalo Cherry Blossom Festival is important.  Cherry blossoms, or sakura, are a symbol of spring. In Japan, celebrations include attending a hanami, or flower viewing with family… more »


The earth is huge. Climate change is dauntingly complex. It's easy to feel overwhelmed, to throw your arms up in despair. To do nothing.  But preserving and protecting this fragile planet starts at home. With each of us,… more »


Can a war that ended a century ago create a sense of community? Perhaps. With the help of a book, a movie, a huge exhibit and a bunch of events. The One Community One Book initiative is featuring Ernest Hemingway's classic novel A… more »

Buffalo Named One of the Best Budget Destinations in the NE


Buffalo has turned up on yet another list of best places to visit. In Best Budget Destinations in America 2018, Part I: The Northeast, Budget Travel lists the NOMA neighborhood of Washington, DC; Norwalk, CT; Portsmouth,… more »

From Farm to Fork to Fine Cuisine


Quick! What's your favorite iconic Buffalo food? Most folks answer wings, but I'm a 'weck girl. Wings were not yet on every menu when I departed in 1974, but beef on 'weck is something I found nowhere in my three decades of globe-trotting.… more »

Trimania: So Much More than Just a Really Great Party


In 1987, Van Taylor had an idea--create a jazz-oriented band that could work on various levels, including education. He assembled an array of musicians and world class entertainers. The group had a unique blend of their own original… more »


I believe that stories are powerful. And I love making them more powerful, and making sure that they are shared. That's the role that I see publishing playing. And that's why I publish beautiful books about Buffalo and by Buffalo… more »


Fat Tuesday is behind us. Lent looms before us. Instead of just giving up meat on Fridays for 40 days and indulging in fish fries, or--heaven forefend--foregoing chocolate, consider getting truly lean.  Take the 40 days,… more »

On the Other Border


It is snowing in Buffalo. The streets are slick and we huddle inside our down jackets and in front of radiators and heat vents. Half a nation away, however, it is hot, starkly beautiful, and can be dangerous if your skin is brown.… more »


The Reverend Dr. Henry Highland Garnet. Time Magazine calls him the "the most famous African American you never learned about during Black History Month." It's about time to address this slight, especially in Buffalo. Henry Highland… more »

Lists: The Good, the Bad and the Great


There are lists. And then there are lists.  I am a listmaker. It feels good to have a finite list of tasks, and it feels really good to check off each and every one of them. Much less satisfying is rolling items on to tomorrow's… more »

Clear Out the Old, Ring in the New - and Give Back


Some people make New Year's resolutions. I long for a fresh start each January 1st. The week between Christmas Day and New Year's Day is a nice, quiet time to clear out one year before starting the next. Pay bills, clear off… more »


Traditions are generally handed down through families, from one generation to the next. Keeping these traditions feels sacred somehow--especially holiday traditions. Placing the same decorations in the same places year after… more »

Shopping for the Christmas Spirit


Over the past four decades I have celebrated Christmas in three U.S. cities, and in four countries on three continents. My least favorite flavor of Christmas is the crass, commercial version I seem to experience here in the U.S.… more »

190 Bryant Street, where it all began


It was late November in 2005, and I had been back in Buffalo for just a week or two. I only planned to stay a month or so while the position in Baltimore firmed up, but had moved into a beautiful E.B. Green apartment on Bryant.… more »


Giving thanks. What a wonderful reason to take a day off and fashion a feast with family and friends. This old fashioned, narrow view of Thanksgiving--one of the only non-commercial holidays in the U.S.--has also made it feel… more »

Books are for Kids!


"How do you like to go up in a swing, up in the air so blue? Oh, I do think it the pleasantest thing ever a child can do!" The first book I remember reading as a child is The Child's Garden of Verses, an anthology of poems by… more »

More than a Dozen Ways to Say Boo! in Buffalo


I hate Halloween. I think I have finally traced this visceral response to a Hershey holiday back to October 31, 1959. I was ordered to remain at the dinner table until my plate was clean. On that plate was succotash, surely the… more »


I got a call from Toronto yesterday. The phone didn't ring, but the screen lit up. The call came in via Facebook Messenger. Really? I thought that Messenger was text only and was used primarily for requests to block nefarious… more »


Do not miss this flick. I am not a movie critic, and I don't even play one on TV, but I can absolutely assure you that you need to see Marshall. I scored a last-minute ticket to the Buffalo premiere of this excellent film last… more »

I Can't Hear You


Sam Harris may have made more people aware of American Sign Language than any effort that can possibly be made during Deaf Awareness Week, which just happens to be next week. Harris provided ASL interpretation for Florida Governor… more »


My parents met in the Green Room at Hobart-William Smith. She was a WASP from Buffalo, he was a second-generation Irish immigrant and Korean War vet from Massachusetts. They both loved the theatre, and they both loved to drink.… more »

Feeling Helpless? Me, too


I feel so helpless. Witnessing hurricane Harvey slam into Houston and the gulf coast of Texas, seeing furniture floating in four feet of water, people carrying the remains of their possessions in black plastic garbage bags on… more »


My two lives collided this week. Well, actually there are three, but two of them just rammed up against each other like a semi and a Subaru. I have never lived in Montana, but Flathead Lake, just south of the western portal of… more »

From Wall to Wall. Stand Up


My daughter was born in Germany the year before the Berlin Wall came tumbling down. She will leave America to study abroad during the year that another Wall is being built. I left the U.S. the year that Nixon was re-elected.… more »

From Ship to Shore


For years while living out West, I found myself sniffing out bodies of water, squealing in delight if I spied a lake in the distance or a sparkle of blue at the end of a street. On trips to any coastal city I invariably indulged… more »

Hundreds of Backyards to Explore


When I travel, I inevitably find myself imagining what it would be like to live in the place I am visiting. I tend to walk in residential neighborhoods, rather than just frequenting museums and tourist destinations. "If I were… more »


One day, my little brother Tim asked me to take him with me to the library. It was a warm summer day in 1964 or 1965. The Fairfield Branch Library was still a library, eight or nine (uphill!) blocks from our apartment on… more »


Lists. You know, the top ten this and the best and worst of that. Most are pretty bogus. But one this week really stopped me in my tracks. Buffalo ranked number two on Entrepreneur Magazine’s list of "booming communities… more »

What Are We Paying For?


"Ist frei." Every time I asked what a procedure or an appointment would cost, that was the answer I received. "It's free." I was pregnant with my second child. It was a relatively uncomplicated pregnancy and a quick and easy… more »