From Farm to Fork to Fine Cuisine 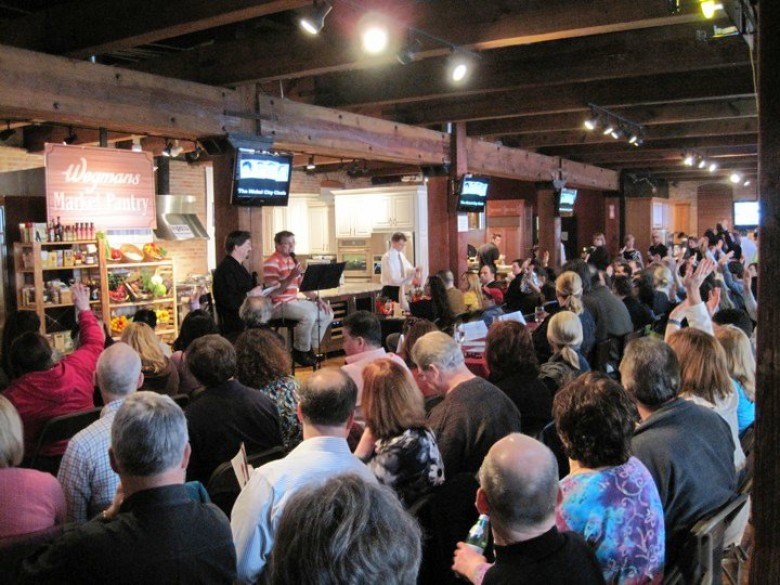 Most folks answer wings, but I'm a 'weck girl. Wings were not yet on every menu when I departed in 1974, but beef on 'weck is something I found nowhere in my three decades of globe-trotting. Thinly sliced, rare beef, topped with killer horseradish on a fresh Costanzo's kimmelweck roll. Now that's what Buffalo tasted like to this long-time Buffalo expat.

Buffalo has always had great pub food, a delicious byproduct of a long, robust pub culture. Beef on 'weck and the ubiquitous wings are both key ingredients of this comfort cuisine.

Then, about a decade ago, the Queen City culinary scene began to grow and spread its wings (so to speak). One new restaurant after another opened. The downtown food desert suddenly offered choices. Allen Street burgeoned. Hertel had more than just fabulous Italian fare. And these new venues were not serving up pub food or family style Italian fare, but smaller portions of beautifully prepared and presented dishes. These were often created and crafted by the chef, and many used locally sourced ingredients.

But this didn't happen in a vacuum, out of nowhere. A farm to fork movement had sprung up in other parts of the country, but it took a fierce, passionate foodie to introduce it to a city proud of its comfort food and used to ordering ginormous portions of pasta. Her name is Christa Glennie Seychew.

Christa recognized that Western New York's small farms-and there are literally thousands of them-needed restaurant buyers to keep them afloat. Farmers markets are great, but one-day-a-week sales is just not enough volume for perishable produce and the many other locally produced foods like heritage pork, grass fed chicken, duck eggs, and shitake mushrooms (I'm not kidding. From Green Heron Growers).

Christa made the rounds, met the farmers and food producers, and connected them with the owners of fine restaurants. She organized a "Foodie-to-Farm Tour" for area chefs in 2008. More than 30 chefs were on board. It was a sell-out! Restaurants began putting the name of the farm or producer on their menu. Farm to fork began to take hold in Buffalo.

But how to get the word out? One of many ways in which Christa helped put Buffalo on the culinary map was Nickel City Chef. She teamed up with Artisan Kitchen & Baths to create Buffalo's own version of Iron Chef. The AKB's side-by-side full showcase kitchens on the second floor of its historic structure on Amherst Street offered the perfect venue. She spent 2009 putting together a team of top notch local chefs like Adam Goetz (CRāVing) and Brian Mietus (Bacchus) to be Nickel City Chefs, and brought on board the inimitable Chef Mike Adrzejewski (Seabar) and Bert Gambini (then with WBFO) to cohost.

Nickel City Chef launched in January 2009. It's very first season consisted of eight challenges, with Nickel City Chefs going head-to-head with challenging chefs to create three course meals in front of three judges and more than 200 onlookers in just one hour using surpise, locally-sourced ingredients like White Cow Dairy yogurt, apples from Dan Tower's farm, or balaton cherries from Singer Farm. The chefs do not find out what the secret, locally sourced ingredient is until the cook-off begins. There are cameras and big screens everywhere. The audience and judges can actually see the chefs simmering, stirring and sizzling.

Year after year, every show sold out within 48 hours of when tickets became available for sale online. Nickel City Chef was a huge success, and in more ways than just its perennial standing-room-only audiences.

Hometown chefs who had left to hone their craft were lured back by the emerging foodie scene in the Queen City. Attracted by the low cost of entry, they saw an opportunity to be their own boss. The fertile ground for this wave of repatriation and new and unique restaurants was prepared by Christa and her high profile activities. At the same time as a start-up community for tech entrepreneurs was being constructed investor by investor in Buffalo, Christa and her cohorts were paving the way for start-up restaurants.

And sourcing locally really did take hold. Not only do more and more restaurants source locally, many home cooks now go to great lengths to buy locally, too. This is both healthy for those enjoying the meals, and great for our independent farmers.

When Christa came to me with a book that would document the first three seasons of Nickel City Chef, I said YES! She proposed not just a cookbook, but a real book that would showcase the farmers and food producers, as well as the chefs, one that would celebrate sourcing locally and Buffalo's world class cuisine. Having seen how well the GardenWalk Buffalo book and DVD helped make Buffalo a garden tourism destination, I had high hopes that Nickel City Chef: Buffalo's Finest Chefs and Ingredients book/DVD would help Buffalo become a culinary tourism destination. And it's happening!

For the past several years, this book and the stellar DVD Food for Change by Nate Peracciny has been the only way for those without tickets to get a glimpse of a Nickel City Chef challenge. Now, it will become the only way for all of us to be part of this remarkable phenomenon.

And the Grand Finale, Nickel City X, with all four original Nickel City Chefs and the full cast of foodies who have helped make Christa Glennie Seychew's vision a game-changing reality, will rock Artisan Kitchen & Baths on Thursday, April 12.

It is sad, but all good things must come to a close eventually. Christa has left an indelible mark on the Buffalo culinary scene. Our city is better for her passion and tenacity.

And the book and DVD are still available (wink, wink!).

200 Amherst St Buffalo, NY 14207
The final installment of Nickel City Chef will take place on Thursday, April 12, 2018, from 7:00 pm to 9:00 pm. This dressier version of our competition features our four Nickel City Chefs in a head-to-head…
- Share this page -