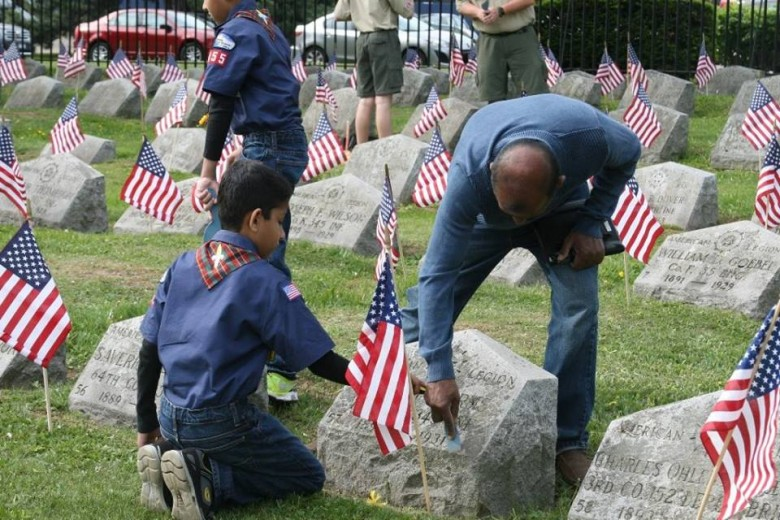 The parade of picnics and scent of hot Italian sausage on the grill threatens each year to obscure the meaning of Memorial Day. We've stretched this solemn ceremony into a three day holiday that signifies the start of summer.

Originally known as Decoration Day, Memorial Day originated right after the Civil War. The picnics where families gathered to mourn their many losses in crowded cemeteries may be the precursor to today's ubiquitous "potluck" suppers, which have morphed into barbecues and cookouts. So sharing picnic fare on this weekend is actually steeped in tradition.

But as we pull out the white pants and sandals which we can now wear with impunity, let's also pause to remember the men and women who have died while serving our country.

A very good place to do this is the Buffalo & Erie County Naval & Military Park on Canalside. The largest inland naval park in the U.S., it features excellent exhibits like Women in the Military and Polish Armed Forces, cool equipment (think helicopters and tanks), and three immense ships to board and explore, including the USS The Sullivans, a National Historic Landmark. And of course, there is a full line up of Memorial Day events at the Naval Park this year.

On Sunday take the Land and Sea Tour. It begins and ends at the Naval Museum and includes an hour of our spectacular downtown architecture and an hour learning about the massive naval vessels at the Park. While at there, be sure to take a stroll down the lovely path that winds though Veterans Park. You will pass no fewer than nine memorials to those who have made the ultimate sacrifice.

On Memorial Day, The Battle Within Memorial Service will honor veterans who have lost their battle to PTSD. This is an effort to understand and get our hearts around the tragedy of more than 20 veteran suicides every day, it’s meant to be both a fitting military salute to those who have tragically taken their lives as well as a forum for issues related to the well-being of Veterans. A permanent memorial proposed for inclusion along Buffalo’s Inner Harbor will also be unveiled.

Later that day, Slow Roll Buffalo continues the Memorial Day tradition of meeting at the Naval Park, which will offer discounted admission to Slow Rollers all day (so get there early!). Military veteran squad members will lead the ride, and the afterparty will take place on and around the ships with food, drinks and music. There will be a handheld American flag giveaway before the ride and, in honor of Memorial Day, there will be a stop in the Michigan Street African American Heritage Corridor at the memorial for Jesse Clipper, a founding member of The Historic Colored Musicians Club who was the first local African-American to make the ultimate sacrifice in World War I.

There are parades and events in nearly every town and village in WNY, and the Star-Spangled Spectacular at Kleinhan's is a time-honored BPO tradition and lots of patriotic fun on Saturday evening. Or head up to Youngstown to Old Fort Niagara for Soldiers Through the Ages. This program captures the spirit perfectly, as does Forest Lawn's Memorial Day Ceremony very early Monday morning.

Here's my tentative Memorial Day line-up: Forest Lawn at the crack of dawn for the Memorial Day Ceremony, followed by a brunch picnic in the gazebo next to the Chapel (where my ancesters' ashes are)--a nod to that hallowed cemetery picnic tradition. Then a bike ride down to the Naval Park for The Battle Within service, and a stroll through Veteran's Park. Then I think I'll walk past the gardens to Erie Basin Marina and have lunch on the water. A leisurely stroll back past the Naval Park to Canalside will take me to a paddle up the Buffalo River, through Elevator Alley. Then I'll head back to the Naval Park in time for Slow Roll and the after party. What do you think?

However you decide to spend Memorial Day, in between the potato salad and the parades, remember to remember.