I Am Finally Riding 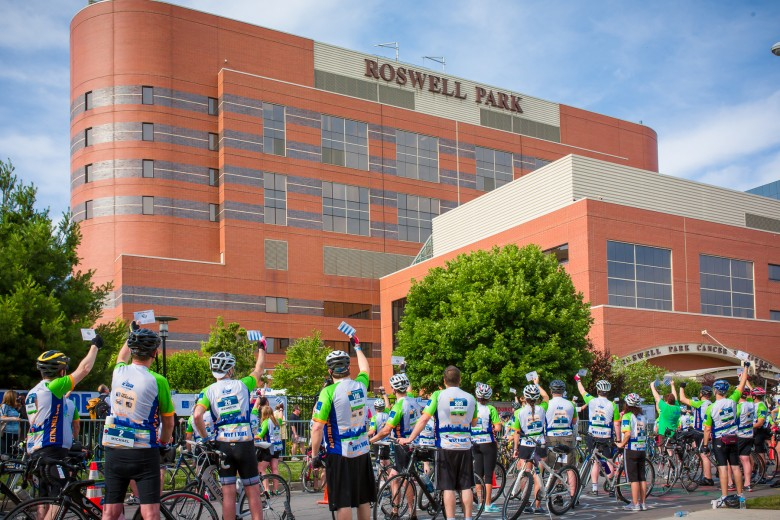 For more than a decade I could not do the Ride for Roswell. Not because I was physically unable, but because I was otherwise engaged that weekend--every year.

Yep. The Ride takes place the third weekend in June, the same weekend that Buffalo Old Home Week/Citybration used to be on. I chose that time frame because it is also high school graduation weekend. Lots of expats are in town for the festivities--both the graduations and The Ride. So I rolled The Ride into that four-day extravaganza, suggesting that "a great way to see Buffalo is while pedaling a bicycle on The Ride for Roswell."

Then, in 2013, I became a Roswell patient. I'm one of the lucky ones. My tumor was benign, but it turns out that even benign tumors are considered cancer. And mine was growing and threatening what was left of the hearing in my left ear. Dr. Prasad and his team at Roswell screwed my skull down and used a gamma knife device to precisely radiate every millimeter of that pesky invader sitting right on my acoustic nerve. I am forever grateful to Roswell for the expert care I received. In fact, I have another follow-up MRI just two days after The Ride.

Which I will be doing--finally! I have been talking about doing The Ride since my close encounter with cancer prompted me to rethink how best to contribute to Buffalo's burgeoning resurgence. In 2006 when I started my campaign to "bring them all back" and "promote Buffalo as a great place to live," there were far fewer things to do here. Think about it. Canalside was still rubble. Larkinville had yet to become a destination. But every year there have been more wonderfully fun events taking place that weekend and throughout the year in Buffalo.

It was while advocating for Canalside that I learned about "placemaking" from the Project for Public Spaces, invited to Buffalo by Mark Goldman. Remember Quicker, Lighter, Cheaper? Canalside and Larkinville are "destinations," places where people want to be, because so much is happening in those new destinations. I had an epiphany. What if I were to promote ALL of the events taking place in Buffalo instead of organizing my own event? What if I were to reach 5,000 or 10,000 people every week instead of just once a year? As a word person (writer, editor, translator, publisher...you get the picture), morphing the Citybration event into the Citybration e-newsletter that uses the principles of placemaking to make Buffalo itself a destination seemed like a no brainer.

So suddenly my June dance card cleared up a bit. I thought about doing The Ride in 2014. I talked about doing it in 2015. I kept thinking about it and talking about it for three more years, always failing to register in a timely fashion. It is, after all, a fundraiser. You can't sign up the night before and really pull your weight.

It was the day after the Skyride when I ran out of excuses and remembered to register. It took all of five minutes to sign up. And because I was shocked to not be even a little bit sore after that 22-mile debut ride of the season, l rashly decided to join my friend Monica Neuwirt (who has done The Ride for 23 consecutive years! and is also a Roswell alum) on the 30-mile Canadian route. Yikes!

But that's not the best part. Within less than 24 hours, two people had already contributed to my Ride! I did nothing but register and the magic of social media (and kind, generous souls) took over. A fellow PS 22 classmate who is now a lawyer in Houston (thank you, Sam Prince!) and--believe it or not--dear friends from Cuba who who immigrated to the U.S. a few years ago and now live in Miami (thank you Luis and Mireya!) also ponied up. I have no idea how Roswell has made their campaign platform so proactive, but I am confident that once I actually start asking folks to contribute that I will easily meet (or better yet, exceed) my $500 fundraising goal.

So don't procrastinate. If you can ride a bicycle, just choose the route that's right for you. Know that people will somehow learn of your Ride and contribute to it, maybe even folks who you have not seen in a very long time.

If you can't can't do The Ride yourself, please be sure to support someone who can. Like me, for instance! I am shamelessly including this link to my Ride fundraising page--but literally any one of the thousands of riders would appreciate your contribution.

Funds raised by The Ride go directly to the cutting-edge cancer research and quality-of-life programs at Roswell and will bring us closer to a world without cancer. No donation is too small. In fact, Roswell says it is able to turn every dollar donated into an additional $13 in new grant funding. Wow. Here's more information on how the funds are spent.

Please consider joining me in making a difference. Oh, and if you know someone whoi has a nice, light bike I can borrow on June 23rd, let me know. I can't believe that I commtted to riding 30 miles just three days after I qualify for Medicare. What was I thinking?