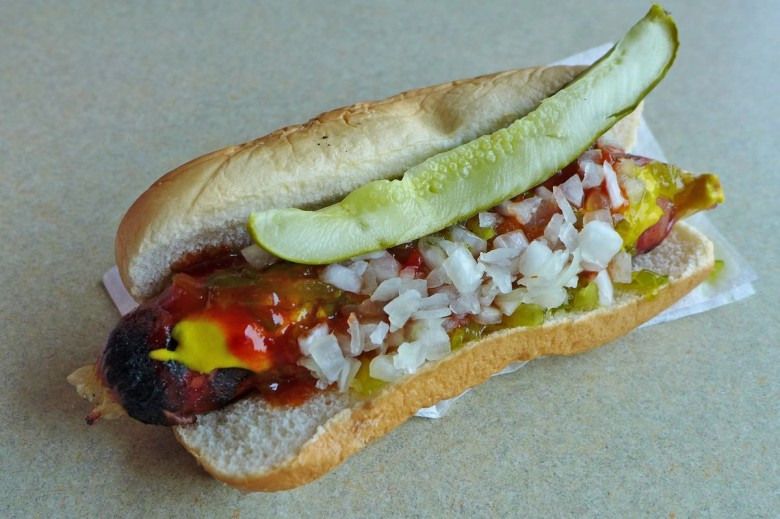 "Buffalo, NY is known across the country for its eponymous spicy wings. But while the rest of America has spent the past several decades gobbling down the Buffalo wings that put the city on the culinary map, locals have been quietly munching on great hot dogs." So writes Larissa Milne in Forget wings - Buffalo is a hot dog town, a surprisingly deep dive into the Buffalo hot dog culture.

"There is no iconic “Buffalo hot dog” – no specific combination of ingredients that define the frankfurters from this city," says Milne. "Buffalo simply has an abundance of great franks. There are two distinct styles – grilled and flat-top griddled – and each have their devoted following. What appears to be universal in western New York, however, is the actual sausage that goes into the bun."

Milne describes describes Sahlen’s pork/beef combo that we love (who knew that Sahlen's is a fifth-generation family-run company?) and explains the two versions of the pork/beef hot dog: natural casing and skinless. The method of cooking determines which version to use, according to Jeff Vance of Sahlen's.

“Hot dogs that are grilled should have a natural casing, which is designed for the high heat of an open flame grill. The hot dog splits as it cooks, allowing the inside to heat and provides that signature bubbly browned exterior,” says Vance. “When steaming, boiling or using a flat-top [griddle], skinless is the way to go. A natural casing frank would simply get tough and rubbery if cooked that way…skinless franks are wasted on a charcoal grill – they don’t split and just turn black.”

Credit for launching Buffalo's penchant for hot dogs is given to Ted's. Readers learn that Theodore “Ted” Liaros was "a Greek immigrant who began his food service career in 1913 selling snacks (including hot dogs) from a horse-drawn wagon. In 1927, Ted opened his first stationary location after purchasing a shack that had been used as a tool shed under the newly constructed Peace Bridge, which was built to connect the United States and Canada. After a $100 real estate transaction, Ted’s Hot Dogs was born...Ted’s original stand was torn down in 1969 during renovations to the Peace Bridge; Ted Liaros died a month later."

Like I said, even well-informed locals will learn a thing ot two.

Louie’s Hot Dogs opened on Sheridan just three miles from Ted's in 1951 and also served up charcoal-grilled dogs, but owner Louie Turco came up with something new and different: the foot-long hot dog. There's a whole bun controversy that accompanies this important local invention, not to mention Louie's “Piccadilly hot sauce.

“Texas Hots” style dogs are the other kind of Buffalo dog, a skinless version of the same pork/beef frank cooked on a flat-top griddle and covered with a meat sauce. These are attributed to Louie Galanes. He opened the first Louie’s Texas Red Hots in 1967 and now has seven locations.

"No matter how you slice it, Buffalo is a hot dog town that’s ready for prime time," says Milne. "From smoky char-grilled dogs that are reminiscent of family cookouts, to sublime griddled Texas Hots, Buffalonians know how to roll."