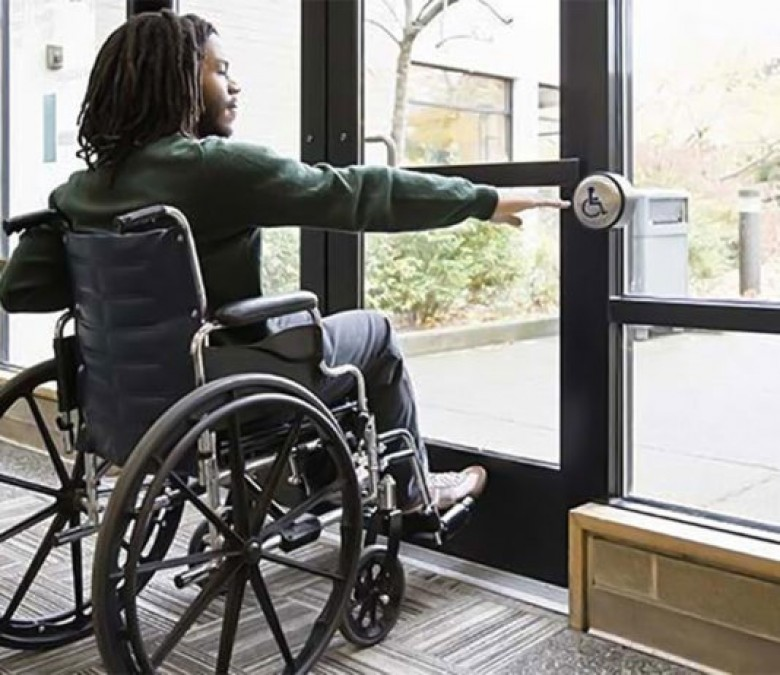 - Share this page -
One day, my little brother Tim asked me to take him with me to the library. It was a warm summer day in 1964 or 1965. The Fairfield Branch Library was still a library, eight or nine (uphill!) blocks from our apartment on Woodward near Robie. I said, "Sure."
When we arrived, I realized that the steps were steeper than I had remembered. But there was no other way to get him in. I started pulling his wheelchair up the steps, backwards, one steep step at a time. Suddenly, my 10-year-old arms weakened, I lost my footing, and my brother, the wheelchair and I all tumbled down the steps, crashing in a bloody heap on the cement below.
We never made it in to the library. Instead, I pushed him all the way to Sister's Hospital, in the street, because it was faster than bumping his chair over the curbs at every intersection. The ER nurses gently cleaned us up, applied some mecurochrome and a few bandaids, and sent us home. No x-rays, they didn't ask for proof of insurance, and I don't believe there was ever a bill. It was a different era.
It was also the pre-ADA era. The Americans with Disabilities Act (ADA) was finally passed in 1990, many years after Tim died of complications from muscular dystrophy. Today we take for granted the many ramps, curb cuts, and elevators that now grace our public spaces. If the lovely E.B. Green structure on the corner of Greenfield and Amherst were still a library, it would have an elevator or at least a ramp to allow those like my brother in wheelchairs and on walkers to enter safely. We may sometimes begrudge handicap parking spaces or use the ample, wheelchair-accessible cubicle in restrooms when no one is looking, but think of the alternative. It's only been 27 years since we finally guaranteed access to public spaces for those of us with physical challenges.
I am thankful for the ADA every day, but this Saturday we can all celebrate this life-changing legislation at the ADA Disability Pride Parade and Festival, a fun family-friendly event in downtown Buffalo. Buffy will be in the Disability Pride Parade as it wends its way from behind City Hall at 10:30, to the Disability Pride Festival in Coca-Cola Field at 11:00. Please celebrate with us!
Given my back story, it should come as no surprise that events listed on BuffaloVibe.com indicate if an event is wheelchair accessible. In fact, it may be the only event-centric website that includes this critical parameter. Hey, Buffy is on wheels; if she can't get in, neither can a wheelchair. And that would also prevent many of our volunteers from Aspire Technology Today from entering and participating in events. No longer, thanks to the ADA!
In fact, the removal of environmental barriers and access infrastructure that has been systematically built over the past 27 years is now paving the way to a whole new proactive perception of access - universal access. It has freed those who rely on wheels to get around to get out and go wherever they please. Even the symbol indicating wheelchair accessible is changing to reflect this new felt freedom.
Look at the person, not the wheelchair, and celebrate this critical ampification of inclusion.

One James D. Griffin Plaza Buffalo, NY 14203
On July 26, 1990, the Americans with Disabilities Act (ADA) was signed into law and discrimination against people with disabilities became illegal. In 1980, The Western New York Independent Living Project,…
- Share this page -