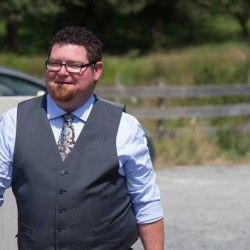 Local Architect/designer and unapologetic nerd looking to drink deep from the cup of life and learn/see/taste/experience as much as possible.


I was encouraged by several friends, whose opinions on such matters I take very seriously, to get to The Dapper Goose for a meal as soon as I was able. There were stirrings in the air that something remarkable was happening there,… more »


Fair Warning: The very words “Lait Cru” literally means, “raw milk,” in French, so let the lactose intolerant beware. One of my dining companions for this meal is allergic to lactose though, and was still… more »


Let’s get right down to it… Providence Social is setting a great example in Buffalo for trendy dining spots that provide you with an unparalleled dining experience in a casual atmosphere. It’s as simple as… more »


When I was in college, I did much of my best thinking in bars, away from the campus (who didn’t?), where my mind was allowed to process ideas at its own pace. Particularly on Friday evenings, I liked to push away from my… more »


In a town with a famous and ever expanding food scene, it is rare to see something truly unique. Until recently, traditional French/Provencal-style cuisine has been particularly hard to find. There are a handful of establishments… more »

The Hotel Dalmatia Is Not A Hotel


Often, especially during a renaissance such as we have been experiencing lately in Buffalo, attention tends to focus on the next big thing. “We are doing great, give us more of that. What is the next thing that will put… more »


The good people at Lloyd are once again humbly serving as excellent ambassadors for Buffalo. This time, they’ve been invited to participate in the Thomas’ Breakfast Battle, a national food truck competition to see… more »


At the end of the day, I think it’s the little things that really elevate a dining experience from good to great. Shear odds are in favor of any restaurant ,of any quality, serving something good to someone once in a while,… more »


There’s a special place in my heart for a classic diner. I grew up spending hours in the Greek diner in my home town with my childhood friends, nursing a $1 bottomless cup of coffee, and doing my best to flirt with the… more »


At this point, La Divina Mexican Grocery and Taqueria is hardly a well kept secret. Just about every publication, blog and facebook food critic in the greater Buffalo area has weighed in on the hot, new Mexican food spot… more »

Vibe On The Road: Red Rooster


Note:  This is the first article in a new series about restaurants located outside of the Buffalo/Western New York area. Buffalovibe.com is a champion of the local scene, local trends, local discussions and it will continue… more »


Historically speaking, I only review the restaurants that I love. Being raised in the tradition of “if you don’t have anything nice to say...” I choose to celebrate successes with these articles. It is with… more »


It sometimes seems as though the neighborhood corner bar is falling by the wayside. There was a time when each residential neighborhood in Buffalo had at least one pub strategically placed within walking distance of just about… more »


There are a very few dining venues for which I am willing to travel. I'm not talking about dropping $500 at Morimoto in New York or the French Laundry in Yountville. That's the type of foodie tourism that is, frankly,… more »


We might be living in a transitional moment. I’m not sure if it’s localized or national, temporal or generational. I can only speak to what I see, so I won’t try to extrapolate too far beyond my own observation.Here’s… more »


I went with some co-workers today to Melting Point in Allentown for lunch, a restaurant with an entire menu of grilled cheese sandwiches and tomato soup. The thought that initially crossed my mind was, "Well how are they going… more »


The first indicator of a reputable Buffalo-style dish is it's unnatural iridescent orange coloring, which the people at Campbell's have really nailed with this recipe. But, the similarity stops right about there. While heating… more »


A new contender vying for your attention in the weeknight Buffalo social scene is Geeks Who Drink, a "pub quiz" event recently franchised out to a handful of locations in our fair city. The Tap House on Tuesday nights, Cole's… more »


For anyone who is in a terrible hurry, it all boils down to this… The Green Hornet is an entertaining film. If you spend the money to see it in theaters you likely won’t feel slighted afterwards. That being said,… more »


Here’s an experiment to try. Ask someone who has spent more than a day in Buffalo what they think of this town. New Yorkers, West Coasters, Southerners; they will all tell you a story of how they instantly fell in love… more »


Buffalo Winterfest and Powderkeg Festival For better or for worse, Buffalo is known far and wide for snow. While statistically not the snowiest place in the nation, we have managed to earn a reputation that we likely will not… more »