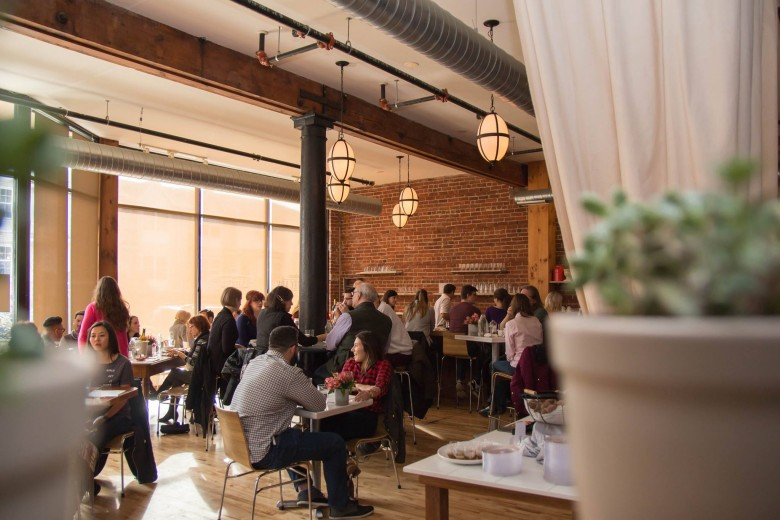 Fair Warning: The very words “Lait Cru” literally means, “raw milk,” in French, so let the lactose intolerant beware. One of my dining companions for this meal is allergic to lactose though, and was still able to have a thoroughly enjoyable meal, so it is possible even with the obvious bias. At any rate…The good people of Nickel City Cheese & Mercantile have vacated their former home near the corner of Elmwood and Bryant for roomier digs on the West Side. Now located in the former home of Martin Cooks on Connecticut Street, Nickel City Cheese has also expanded to include Lait Cru Brasserie for meal service. One might wonder what to expect from a cheese monger come casual fine dining restaurant. The answer is apparently two-fold: to be pleasantly surprised and a whole lot of great food.

Firstly (as we often begin), let’s talk about the venue and wait staff. Being interwoven with the Horsefeather’s Market space, I think that Lait Cru might have been slightly limited in what they were permitted to change, so the interior space is very similar to Martin Cooks. I personally, think this isn’t a bad thing though. Lait Cru has a simple, comfortable, un-crowded dining area, flanked by an open kitchen on one side, and the Nickel City Cheese shop area on the other. The space feels very relaxed and allows people to converse without making the large open space cacophonous.

I don’t know if this is policy, or just a nice server going above and beyond, but while we were there for a 7pm reservation on a Saturday, one of the servers was willing to run over to the cheese shop and ring up items for diners in between her other regular tasks. One of my dining companions was able to purchase an intimidating portion of triple cream brie to take back for his work colleagues while we were there. Our waiter was very attentive and gracious; this clearly was not his first rodeo. At one point I noticed that he was keeping a keen eye on our progress through our first courses so that he could time the firing of our next course perfectly and keep things continually arriving at the table with very little lingering in between, all while not making us feel at all rushed. This kind of, let’s call it, “experience management,” doesn’t have a great deal of precedent in Western New York, and I’m glad to see new restaurants continually raising the bar year over year in this area. The only small caviat that I would mention about our server was (and this might have totally been in my head, but I don’t think it was) that as he brought out a dish and said what it was he kept saying “ze” instead of “the”. As in, “And here is ze charcuterie plate.” I think he might have been playing a “Super Troopers” style cat game with us all night. If this is the case, I think it’s absolutely hilarious.

Now on to ze cuisine… I was joined for this dining adventure by three friends from out of town: one from New York City, and the other two, a married couple from the Rochester area. We began with an amuse bouche of Gruyere Beignets, lightly fried fluffy pillows with a small amount of gruyere cheese in each; like mozzarella sticks for grown-ups, and incredibly delicious. Ok, now we’re intrigued and ready for this meal to begin in earnest! Next, we shared the charcuterie and cheese board, comprised of a peppered salumi, an 18-month aged Serrano ham, a triple cream brie, a gorgonzola, and a gouda, with several accompaniments (mustards, toasted nuts, a poached pear slice, etc.). This shared very nicely among the four of use and was well-received by all, however I will say that for a cheese monger, I half expected the cheese board to present us with something more unconventional.

For our next course I ordered the Humboldt Fog Tart, a generous cut of semi-soft goat’s milk cheese with a layer of edible ash woven through, resting on a flaky puff pastry tart and drizzled with honey. The earthiness of the cheese, sweetness of the honey, and light airiness of the pastry combined to make every bite more amazing than the last. It was definitely a dish that I tried to savor and make it last as long as possible. My dining companions ordered the Butternut Squash Soup and a Warm Beet Salad, both of which I was assured were very good indeed.

For the entrée I had the Steak Frites, which while very enjoyable, was the most pedestrian dish that we had that night and in hindsight I may have ordered differently. It consisted of a generous cut of steak cooked to order (medium rare for me please) cut across the grain and served with some fried potato wedges and accompanied by a horseradish cream sauce. This horseradish sauce was by far the highlight of the dish for me. I would say though that while the pre-slicing of my steak made for a beautiful presentation, it also contributed to the steak cooling off quite quickly. I felt like I was playing Beat The Clock to eat my steak before it was completely cold. But again, I would stress that this was still an enjoyable dish, it was merely outshown by the other dishes presented that night. My dining companions had the Roasted Half Chicken and the Grilled Turbot, again I was assured that they met and exceeded expectations nicely.

Lastly, the dessert course… At this point, we had feasted mightily and debated if this was even advisable. But in the name of thorough assessment, we decided to order two desserts and share them among the table. The first was a triple chocolate cake, which was exactly as great as it sounds and all parties were well satisfied. The second was a dish I had not seen in the U.S. before and could not pass up the chance to try it out… an Isle Flotante. Isle Flotante translates from French as “floating island”. It is a dollop of meringue literally floating, like an island, in a pool of Crème Anglaise, and in this case dotted at even intervals around the “island” with fresh blueberries in the crème. I tapped the outer shell of the meringue with the back of my spoon and it shattered into tiny icebergs of egg white and sugar in the crème anglaise sea and it was sublime.

I’ve been told that I’m sometimes unfairly critical of French cuisine in this area, and that I should allow for a little more latitude toward a relatively fledgling food scene. Lait Cru Brasserie is proof that the food scene here is ready to step up its game and over experiences that rival some of my favorite fine dining establishments in New York City, Montreal, or Chicago, and beyond. I don’t know what it is about Connecticut Street, first with Martin Cooks, followed by Black Sheep, and now Lait Cru, but it appears to be the start of an enclave of great dining spots and I hope it continues to grow and offer singular meal experiences like the one were able fortunate to have had at Lait Cru Brasserie. Come hungry, bring some friends, take your time to enjoy every bite, and revel in the warm feeling that this place is the sign of more good things to come.

Note: Special thanks to Mellonie Suen for the photography.