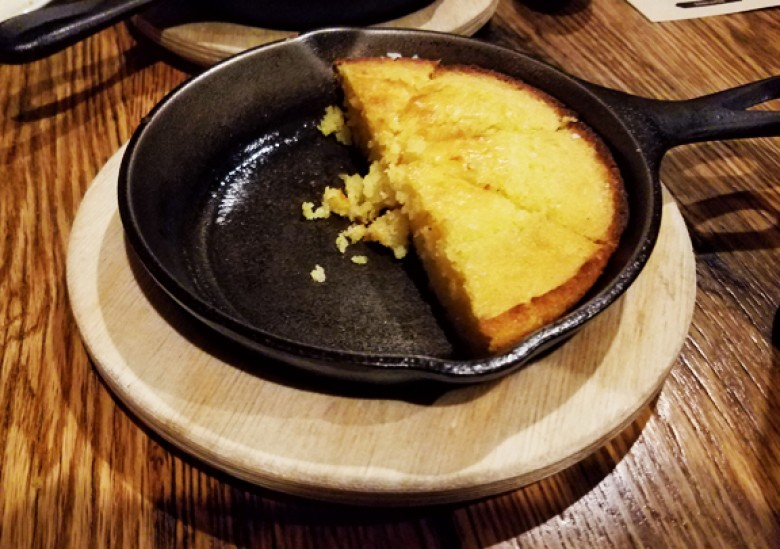 The turning tide of Buffalo’s long suffering economy brings with it a slate of new restaurants. It’s pretty simple math really; more people working/living/playing downtown equals more people who need to eat equals fertile ground to start restaurant ventures. Cities like New York and Toronto have experienced this for most of their history, but it’s all too new and exciting for us in the Queen City.

The next factor is that each new restaurant wants to stand out from the rest with innovative cuisine, the hippest new venue, or by providing a type of dining experience that hasn’t been seen in Buffalo before. Ultimately though, water seeks its level stasis and some of the new spots sprouting up will inevitably fall by the wayside, giving way to the truly successful models. Toutant on Ellicott Street, near the newly-minted Genesee Gateway area of downtown, now finds itself in that very crucible.

The brainchild of Chef/Owner James Roberts (himself a Cajun, transplanted many years ago to Buffalo), Tountant seeks to present Cajun fare in an upscale yet casual atmosphere. Before we really dive in to reviewing this particular restaurant, we need to get clear about some key terms.

These definitions will factor heavily in the discussion of the food which follows.

But first a few quick words about the venue itself. The hostess station is immediately inside the front door, separating arriving guests from a long narrow space, with the bar on the left side and twelve to sixteen banquette-style tables on the right. Most of the dining tables are located upstairs in a loft which overlooks the end of the bar and hostess station. To access this seating area, guests are led to a long, narrow, and rather stark corridor, behind the entire length of the bar, which connects the front of the establishment to the stairway at the back. It seems like an awkward layout and tightens up an already quite narrow bar area. Purely from a design perspective, it is typically not desirable to occupy so much interior square footage just for circulation space (hallways, stairs, elevators, etc.). Speaking of which, I did not see an elevator for wheelchair access to the upper floor, so those of you with limited mobility might want to call and confirm that this was just (hopefully) an oversight on my part. The décor itself is trendy, very of the moment, with what appeared to be reclaimed hardwood wall panels and flooring. Aside from the few previously stated plan layout issues, the design of the place serves well the restaurant’s mission of high-end yet casual.

I had heard impressive things about Toutant from some friends whose opinions on such matters I do not take lightly. The story was one of casual elegance, consistently good food, and a well considered beer/drink selection. When I was finally able to take in a weekend dinner service, I was very excited about this meal, expecting it to hit all the right notes. If anyone reading this has read my reviews before, they will know that I often try to admit my biases so as not to unfairly color the expectations of others. To that end, I will say that Louisiana cooking, along with rustic French cuisine (courtesy of my own familial heritage), are some of my favorite styles of food in this world.

My dinner companion and I chose to begin by sharing some small plates with beers to top off a weekend of beautiful weather. First up, the Smoked Sausage ($10); on this day it was a Kielbasa-style sausage with fennel. In retrospect, I think this item may have been the highlight of the evening; simple, well-spiced, and prepared minimally, allowing the constituent elements to stand out. Arriving just behind the sausage was the Cast Iron Corn Bread, baked to order ($6). This was a perfect example of gold standard Southern cuisine. The corn bread was just moist enough with a hint of sweetness and baked to that textbook golden color. My only issue with the corn bread is that it’s a bit of a commitment for two people, perhaps better sized for a party of three. But clearly that is my issue as the one who placed the order, not any fault of the restaurant.

For our entrée course we chose to share the Traditional Creole Jambalaya ($18). The menu offers guests a combination choice of chicken, shrimp or sausage (or vegetables) as the protein component of the dish; we went with chicken and sausage (the same sausage as the appetizer, as opposed to the traditional Andouille). This is where the previously defined terms come into play. When I saw that the diner could mix and match the proteins, I immediately thought, “How does that work? Doesn’t the protein need to cook together with the rice and other ingredients?” Once the dish arrived tableside (a massive portion, already divided onto two plates for us), I realized that the chicken and sausage were cooked separately from the rice and base elements and combined on the plate. I will admit that this disheartened me mightily at the time. Everything I know about jambalaya (and many Southern dishes in general) is that the magic is in the way all the components come together in the pot and cross-populate the flavors throughout the dish. It seemed, in that moment, that the restaurant’s efforts to be flexible for their guests had compromised that quality of the dish. I thought that if a dinner for two comes out to around $70 (including drinks & tip, etc.) that I shouldn’t leave feeling disappointed in a staple of Louisiana cooking. That just didn’t set right with me at all. This chef had the pedigree and background to not make such a misstep.

I mulled over how I would address this for the review, but then I decided to do a little bit of homework. I discovered that there are, in fact, multiple traditional ways to prepare jambalaya, and that what I had always known to be jambalaya was, in fact, Creole or City jambalaya, where everything is cooked together in one pot all at once, and what we were served was Cajun or country “white” jambalaya, in which the base, rice and proteins are cooked separately and combined on plate. Eureka! The failure was not in the kitchen, but rather in my expectations.

So where does that leave us? On the one hand, I’m glad that I did the legwork to understand what the chef was going for, but on the other I realized that most people probably won’t make that effort and may just write it off as poorly executed jambalaya. I spoke with several friends who have had this dish, and was informed during the preparation for this article that still several other people I knew had the exact same reaction: this isn’t how you make a good jambalaya.

So, I would offer Toutant the following suggestion: don’t presume that the average Northerner knows the subtleties of Louisiana cooking. Instead, perhaps offer the education that I had to seek out on my own within the pages of the menu. Perhaps the cleanest way to do this would be to put both Cajun-style and Creole-style jambalaya on the menu. This should automatically get the diner in the mindset to understand the difference and then state an informed preference. Creole-style will have to be less flexible on the protein content, but if someone is ardently pro-chicken or anti-shrimp, they can be gently pointed toward the Cajun-style and nobody will feel misled. Not only would everyone get what they want, but many will also learn a little something about this amazing cuisine.

Toutant is too new in a town that has too many budding restaurant choices to suffer the unfair biases of the not-yet-adequately-informed. Toutant can and should solve this simple issue. Because, while it is a simple and small one, it has the potential to unfairly color the perception of many at a time when the restaurant needs to be building and solidifying its customer base. As always, I would urge you to go and try it for yourself. My judgment should never be a substitute for your own. But, if you’re going to go for the jambalaya, please bear this review in mind in order to judge your food fairly.