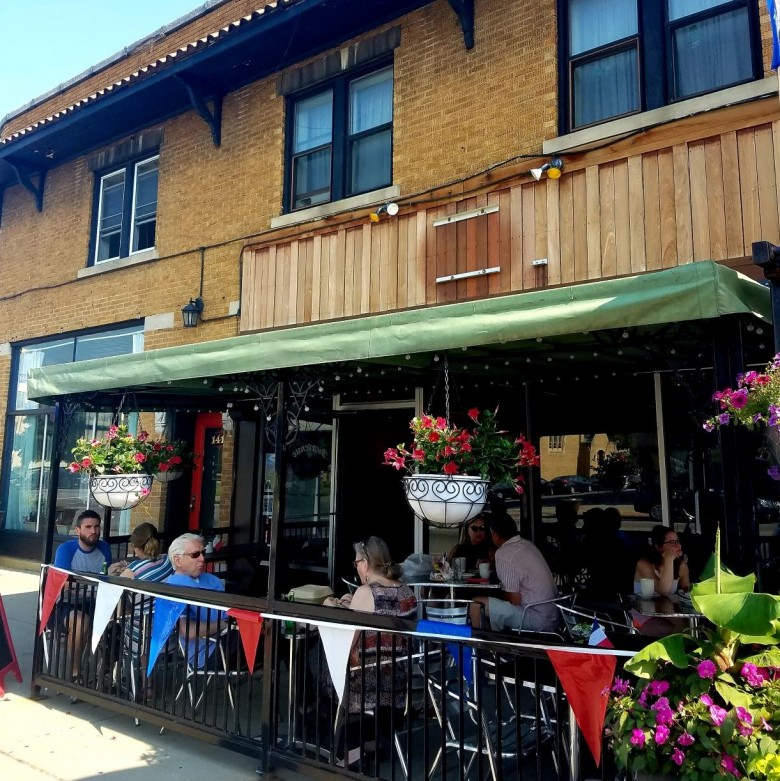 Certain experiences evoke very particular states of mind. Specific sights, scents, sounds, or textures can trigger strong memories. The olfactory combination of cinnamon and pine, for example, calls up the fairly ubiquitous notion of Christmas. Cool breezes of salt air can transport us to summertime coastal beaches. There are easily dozens of examples. For me, personally, the diffuse light of a hazy, thinly overcast day weaving through tree leaves can immediately transport me to the verdent country gardens of Ireland from my time there in college. Most importantly for our purposes here: the subdued hum of conversation, the bracing scent of strong European coffee, and the faint sound of jazz music can combine to create the unmistakable feeling of Paris. Never before has this feeling been so palpable and readily at hand as it is now that Pastry by Camille has found it's new home on Hertel Avenue.

It's a rare thing to be offered all the best of French cafe culture, without presenting your passport. Although, if Chef Camille Le Caer continues to imbue this joie de vivre into his new location, it may soon qualify as sovereign soil. Le Caer is, himself, a native of Brittany (a region in the North-West of France), and after turns in the kitchens of Paris and New York City, he has landed in the Queen City to bring us something refreshing and vibrant. Some readers may already be familiar with Pastry by Camille, as Le Caer's work has quietly slipped onto the dessert carts and into the menus of several Buffalo area restaurants, but Maison Le Caer is, to my knowledge, their first brick and mortar, direct to customer endeavor in the area.

The sensation of being transported begins with stepping up to the restaurant itself. Located immediately next door to Mes Que, in the former satellite of Globe Market, Maison Le Caer greets you with an airy, shaded patio, each table bearing a small potted plant and a tiny french flag. From inside you will hear that particular cut of jazz music that could only herald a French experience. This place looks and feels like a Django Reinhardt song sounds. Upon entering, through the patio, one notices the crepe station along the right side wall, before moving past a few inside dining tables toward the counter. All the crepes are made to order by Le Caer and delivered to diners immediately. The counter includes a glass display case for the day's pastry offerings. Behind the cashier is another display case for baked goods. The casual way that the decor is assembled, yet all hangs together perfectly, is a quality often attempted but rarely achieved in cafes outside of Europe. In this small aspect lies the critical difference between authenticity and impersonation.

The staff all seem alert and excited to be part of the endeavor; helpful without being in your face. You're left with the feeling that they would be smiling and listening to Edith Piaf whether you were there or not, but they are happy you are. There are often three to five people working away behind the counter, presumably more so in the morning hours, as they are finishing up the day's bakery selection.

The food. At the end of the day it's nowhere without the food, and rest assured, discounting everything else I've said up to this point, Maison Le Caer gets there entirely on the back of the food! My dining companion and I tried to experience a fair cross-section of the menu, though be warned that, at least when we went on a Sunday morning, items can go very quickly. I had come almost entirely out of curiousity about one menu item: the Eclair Paris-Brest. An eclair Paris-Brest is a donut-shaped pastry cut and sandwiched with a praline filling, often topped with almonds. It is so named because it was developed to commemorate an annual Paris to Brest and back bicycle race, which began in 1891. Word is that the donut shape is supposed to be reminiscent of a bicycle wheel. And, I suppose, if you're riding a 1,200 kilometer bicycle race, you've earned a carb forward, sweet treat. Sadly, on my first attempt, they had already run out of the Paris-Brest for the day, but I was able to try one on a subsequent visit.

My dining companion ordered a savory crepe with goat cheese, arugula, and a drizzle of honey ($9.50), which she reported was very good indeed. For my part, I had the Croque Madame ($9), a "sandwich" of ham and cheese (usually emmental or gruyere) on toasted bread, topped with a lightly fried egg. I have had a handful of Croque Madames in my life, and this one is definitely one of the best. And it just wouldn't be a French breakfast without a croissant! Light, flaky, and buttery, topped with a little bit of jam, the croissant ($4) hits all the right notes.

On a second visit I also had the eclair Paris-Brest ($8), and it was everything I had remembered from the last time I had one in the shadow of the Eiffel Tower many years ago. I also picked up a fresh baguette ($3.90) to share with my co-workers that day and some fresh butter from the market. The baguette has all the right crunch and give, with just a perfect little bit of toasting, indicative of something pulled from the oven at exactly the right moment. And, although we didn't sample any with our meal, it should also be said that Pastry by Camille is known for their amazing macaroons. A robust and rotating selection of flavors are available every day.

While this review has been very heavy on the complimentary (I prefer to accentuate the positive), I would be remiss if I didn't at least mention the few small items that detracted from my experience. First, let me say that I think the only issues I have observed at Maison Le Caer were almost entirely a function of their early success. The line can be a bit long. They might run out of items, and sometimes quite early. While I entered through the patio, it is evident by the layout that they would have you enter through entrance on the corner of the building. However, this door does not read as the main entrance from the street which can cause some confusion and gridlock around the cash register. Any other problematic observations may be alleviated as the initial surge dies down and they are able to continue to dial in their output to match demand.

Overall, I think that we could all do a lot worse with our lives than to enjoy a Sunday morning on the patio with a coffee, a croissant, and a friend or two at Maison Le Caer.