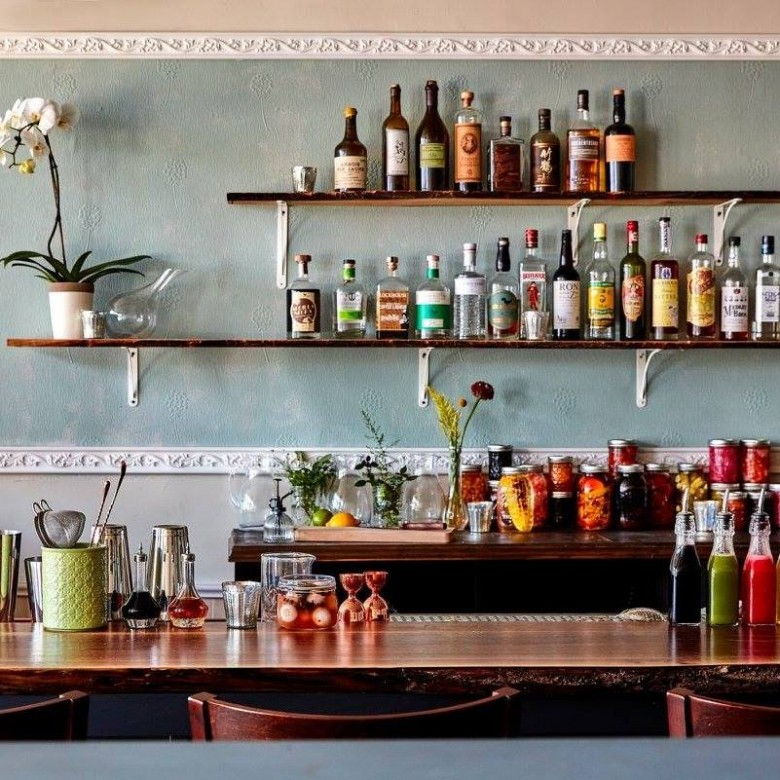 I was encouraged by several friends, whose opinions on such matters I take very seriously, to get to The Dapper Goose for a meal as soon as I was able. There were stirrings in the air that something remarkable was happening there, so I gathered up a group of holiday guests and made a reservation. For this journey, I brought three dining companions, one a Buffalo native and fellow architect, another a friend visiting from New York City who works in the finance industry, and the third an electrical engineer from Washington D.C., all of us close friends from our college days at the University at Buffalo. We don’t get a lot of opportunities to all get together anymore as careers, families and sheer distance seldom allow it. So to gather this quorum of people around a dinner table is almost a sacred occasion.

We made our way to the Dapper Goose, in the former Black Rock Kitchen on Amherst Street. The space itself is relatively small, seating maybe 20 to 25 people, with a bar along one side. It is laid out very similarly to Vera Pizza on Lexington Avenue, but is better lighted and slightly larger. The décor is minimal and clean; clearly the food is the focus.

We were seated and got right to it. For our first course, we had a cheese and charcuterie board to share. The charcuterie included a chicken liver mousse, a duck rillette & a terrine, and on balance, it was a very well curated group of delicious meats. I also specifically ordered from the menu the Epoisses de Bourgogne, as it is a cheese rarely seen on American menus. It is rare because Epoisses de Bourgogne, commonly shortened to just Epoisses, is an unpasteurized cheese, which is hard to come by in the United States due to our very strict public health and safety requirements. Also, Epoisses is commonly described as an "over-ripe soft cheese." One of my dining companions had been given a piece of Limbuger cheese for Christmas, and even he thought that the Epoisses was a bit of a challenge. It is pungent, nearly runny, often served with a spoon, and one of the funkiest cheese that I have ever had in my life…but in a good way. Fair warning to all you food adventurers out there, it is not a cheese for the faint of heart.

For entrees, one of my friends ordered the Roasted Vegetable Salad, another had the Pork Shoulder, and another had the Skate Wing. I had the much lauded Korean Fried Chicken. I was told that there were some issues with the cooking of the pork shoulder, a bit of dryness, as my friend put it. The skate wing was fried like a Buffalo-style fish fry and plated on top of a potato-based curry. Again, there were some prep/cooking issues, but the flavor profile of the dish was interesting and enjoyable; a lot of potential here. The Korean Fried Chicken was 90% of the reason I was told to get to the Dapper Goose, and it did not disappoint. Two portions of Southern-style fried chicken coated with Korean BBQ sauce, plated with kimchi fried rice and spicy pickles (courtesy of local pickle smith Barrel + Brine). It should be noted that Korean Fried Chicken does not, in fact, involve the Korean-style preparation that the name would suggest, but rather a playful incorporation of Korean flavor profiles into an American-style dish. Each component was brilliant unto itself, but when the chicken, fried rice and pickles hit the fork together, the whole was greater than the sum of its parts. While my dining companions we not over the moon about their choices, I clearly see why the Korean Fried Chicken is winning the day in local foodie circles.

The service staff was polite and accommodating, although a bit slow at times. I got the sense that there was one chef in the kitchen covering the entire dining room, rather than a typical brigade of one guy doing garnish, one doing proteins, and one more plating and expediting. It made the dining room lag a bit, but it’s definitely something that they can improve on as they find their rhythm. The bones are there, and with a little bit of logistical and execution work, Dapper Goose could easily install itself on the growing list of great new restaurants in Buffalo. I encourage you to check the place out with the understanding that the safest bet is the Korean Fried Chicken. The most dangerous bet might be the Epoisses de Bourgogne cheese, but for the right rugged soul, it just might be a bright light in an otherwise dim world.