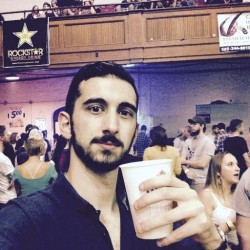 
There are two sides to Trent Reznor. There's the ferocious and raw power of a man flaying away at his own demons and spitting with disgust on the world placed both within and without. And there's the contempletive, often melancholic… more »

The Troubadour's Companion: A Review of Fleet Foxes' "Crack-Up"


Troubadours are known for their musical talent, but also their constant travelling and wanderlust. Never content to settle in one place, the troubadour travels the land, singing from town to town. Perhaps their life is a lonely… more »

Of Love and Death: A Review of The Birthday Massacre's "Under Your Spell"


Attempting to cover a record that may have flown under some radars this year, I went into Canadian darkwave/synth-metal-pop band The Birthday Massacre's new album, "Under Your Spell" with high hopes. The band has always struck… more »


Having grown up and lived in East Aurora for my whole life, there's a certain closeness here that feels wholly unique to me, despite having traveled to many places around the country. It could just be the attachment from experiencing… more »

From Where I'm Sitting: A View on Buffalo Porchfest


The old  cliché is that many of the best bands in the world started in garages. Well, why not a porch? That's the philosophy behind Porchfest here in Buffalo, a biannual festival that started in Ithaca, NY and spread… more »

The Rock Show: A Review and a Meditation


Last week, I was fortunate enough to visit a very dear friend of mine in Baltimore. I was even more fortunate to be able to attend the biggest rock concert in the country that day with him: Metallica at M & T Stadium. It… more »


Made Violent has been and still is the most exciting young band in Buffalo. Period. If you've never done yourself the favor of going to one of their live shows, hopefully this review will convince you to do so in the future.… more »

Grief, in Three Acts: My Experience with Sufjan Stevens' "Carrie and Lowell"


Sufjan Stevens' last album, "Carrie and Lowell" was staggering. Across the critical board, almost every outlet and fan agreed that this album was one of his best. Stevens, the 41 year old eclectic and empathetic singer songwriter… more »


Oh what strange times we live in. Over the past year or so, it has felt as though humankind has been caught up in a whirlwind of news and concepts that make it seem as though the world has devolved into a place so foreign… more »

The Beat Goes On At Cool Beat Music And Books


At its best, music is a communal experience, and that's what Wayne Zaganiaczyk, owner of Cool Beat Music and Books is aiming to make his store. "I'd wanted to open a small, independent record store for a while and I… more »


"He who makes a beast of himself gets rid of the pain of being a man."  Great English writer Samuel Johnson spoke those words in the late 1700s, and I think they encapsulate beautifully the narrative of the latest "X-Men"… more »

The Particle and the Wave: An Interview with K. Flay


"Wow, who was that?"  Those were the words that came out of my mouth when I first heard K. Flay's song "Blood in the Cut." I was driving home late one night tuned to Buffalo's own 103.3 The Edge, and this smoldering, abrasive,… more »

A Dose of Reality - My Experience on the Stage


"Kris, why don't you stick around and read anyways?" Those were the words my director spoke to me that led to me being cast in Aurora Players' production of Jon Robin Baitz' "Other Desert Cities," which as I'm writing this, officially… more »


If you don't know who Steven Wilson is, I'm going to have to ask you to put this review on hold. Just open another tab for a while and search out the music that this man has made. He's my favorite musician of all time for good… more »

The Top 6 Soundtracks You Probably Haven't Heard Yet


Soundtracks evoke something in me that few other collections of music can. They appeal to my sense of fantasy, where I can imagine myself in a galaxy far, far away (happy birthday John Williams) or the dark places in Middle Earth… more »

Nostalgia and the Art of Not Caring


I flip the pages of my 2010-2011 high school yearbook, and I feel a pang of...what exactly? Regret? Longing? Happiness? All three, I think. Being the most nostalgic person to have ever existed on planet Earth, this is totally… more »


"Manchester by the Sea" was a revelation. Not since Richard Linklater's "Before" trilogy had I seen life--messy, complicated, tragic, and beautiful--crystallized and captured so perfectly on film. Beyond every technical and performance-based… more »