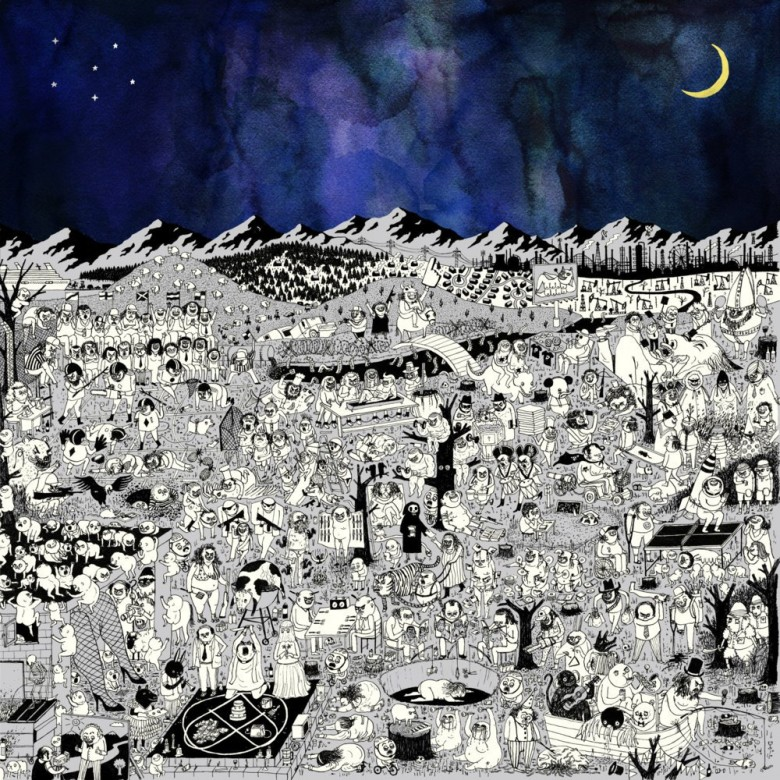 Oh what strange times we live in.

Over the past year or so, it has felt as though humankind has been caught up in a whirlwind of news and concepts that make it seem as though the world has devolved into a place so foreign and surreal, it's as though we're watching a film. Enter Father John Misty, aka singer-songwriter Josh Tillman, whose sardonic and biting, yet equally evocative and emotional and passion-filled words and music, have drawn praise from across the board. From meditations about vices and virtues (on his debut album "Fear Fun") to a scathing and sublime look at love and what that word means (second album: "I Love You Honeybear"). And now we have his musings and analysis of the world at large; society as we know it and are experiencing it every day through our televisions and interactions between people divided politically, intellectually, and morally.

"Pure Comedy" comes at a time when the world (and the music world) could not need it more. What do you do when life throws you problems? Write about them. What do you do when the world IS a problem? Write about that, too. Father John is not only incredibly self-aware, but also capable of distilling the grand and overarching problems of the world to songs that feel wrapped up in intimacy. He's also the master of endings. I'll address that point when we get there, but let's delve further into the album.

Opening title track "Pure Comedy," is a stunning opener. It's not so much about any specific topic, like the majority of other tracks on the record, but is instead a wide, sweeping dissection of humanity and our nature. It's not exactly a flattering picture, but the track is one of my personal favorites and one of the best on the record. Tillman's voice is strong and emotive as it's always been, and the meandering, slinky piano gives a vaudevillian tone that fits right in line with the outrageousness and dissonant state we exist and find ourselves in. But, and this seems to encapsulate this record from the beginning, there is the ever present IN SPITE OF ALL THIS. What I mean is that Tillman often throws a deluge of observations that paints humanity as idiots stumbling in the dark to find meaning and trying not to blow ourselves and the planet up. But in the last line of this song he simply states,

It's both a man shaking his head at the ground, frustrated, but still hopeful that we'll go on, as we always do, to create meaning and substance out of the chaos of our world and the lives we live; out of both objective and subjective realities. What an amazing ending line. That's the first instance on this album of Father John being the master of endings.

"Total Entertainment Forever," is an astute look at our obsession with immersion in technology and the shallow pleasures of screens and living vicariously. It's a jazzy, groovy track with great horns and perhaps the most uptempo track on the album. It's definitely a song that screams "single" and falls the closest in line with Father John's previous work, but that's not a bad thing by any means, in fact quite the opposite. "Things It Would Have Been Helpful to Know Before the Revolution," is a track that has some great lyrics about a future where humans overthrow the government and form a new society where we return to our hunter-gatherer roots, but the melody here isn't anything special. It really blends in as just the next piano ballad on the record, and there are many.

"Ballad of the Dying Man," is the other track that feels distinctly Father John-esque on this record, and again, this is a good thing. The vocal melody is winding and the piano returns that musical-theatre style that works so well. Plus the lyrical content here is so humorous, with it being a look at a potential future hipster on their deathbed, wondering "if his commentary had been more lucid than anybody else," and having him "check his newsfeed to see what he's about to miss." It's a wonderful take on liberal millenial culture.

"Birdie" was a surprise to me. It's actually quite a beautiful, lush piano driven track about a man looking at a bird and envying how it can fly away from the problems we face on solid ground. It still keeps the lyrically biting tone, but softens up at times and musically is quite lovely. Then we come to the personal epic of the album, "Leaving LA." Tillman covers everything in his own life in this 13 minute track, from his musical opinions, his views on the city itself, his rise in the music world and his image, and most interestingly, his past. He gets very intimate and vulnerable with each passage, with the most striking being one towards the end where he speaks of a moment when as a boy he almost died while choking on candy in a department store. The irony of the atmosphere he was in still doesn't escape him, as he takes a tear and makes it a sly smile.

"A Bigger Paper Bag" didn't grab me whatsoever. It's a musically pretty forgettable track, but it does have some classic Father John words of wisdom on narcissism and vice in the world at large. However, the next track, "When the God of Love Returns, There'll be Hell to Pay," is musically sweet and hymnlike, which I can only imagine was the intent. This is perhaps one of the most straightforward tracks in terms of sound, but that's what I enjoy about it. There's a gospel choir as Tillman sings about how when God comes for the final judgement, humans look at him and essentially say, "hey man, it's not our fault we turned out this way. You didn't give us much to work with here."

"Smoochie" is exactly the kind of track the album needs at this point. We've heard a lot about humanity's issues, but one thing that seems to take hurt and anxiety away is love, and it's no different in Josh Tillman's own life. A gentle guitar strums as he sings about his wife salving his mental strain and personal demons through her words to him and through her comfort. It's another incredibly intimate song, but one to remind us about what matters most when the world seems too much.

And then we're right back on track to tearing each other apart. Literally. With the song "Two Wildly Different Perspectives," perhaps the most forwardly melancholic and outright depressing track on the record. It's certainly effective in its simplicity. The piano is rich and the sonic glitches that pop up in the song seem to amplify the disconnect between the two extremes of human thought, which both seem to hurt everyone in the end, as I'm sure we've seen as we look around in real life.

Mental disconnect is the theme of the track, "The Memo," and it's a western tinged meandering track that covers a lot of bases, similar to the title track, but a little bit more upbeat in tone. As the guitar and piano winds around, TIllman discusses our own egos, but it goes a lot further. This is perhaps the most perplexing and thought provoking track on the album, and I would think each listener draws something different, but I draw the sense it's a commentary on the lack of true meaning and rise of "deep thinking" in upcoming generations. I could be wrong, this is a tough track to mentally digest, but one that's worth it both musically and lyrically.

And now we reach the ending. The masterful ending that Tillman always executes. The last two songs on the album deal with the, "so how do we cope with all of this craziness," question. The first song, "So I'm Growing Old on Magic Mountain," deals with the hedonistic sort of coping. Never growing up, embracing the vices of your youth until the day you die. Any substance in excess is A OK here. The last straight piano ballad here, the song gradually builds to this droning soundscape and finally ends with a comtemplative piano passage that adds some poignancy. But the last song is what ties this whole album together, and boy is it a doozy.

"In Twenty Years Or So" finds Tillman asking himself, what does it matter anyway? We're just, as he says "a speck on a speck on a speck." We're so insignificant, and this is a tough existential question for all of us to reconcile. But it's in the most simple moments with those that we love that Tillman knows we find our life's meaning. As he says so beautifully as the guitar and piano take a subtle backseat and softly play, "I look at you as our second drinks arrive...and it's a miracle to be alive. There's nothing to fear." And so we reach our answer, our masterful ending. It's true that chaos might reign in this world, but when you take the time to truly live in a moment with a loved one and appreciate all that's going on around you and within you at that moment, none of that chaos will matter to you then. As much as Tillman seems to hate tired cliches and cheesy phrases, it seems he really is saying that love is the only way out of this mess we're in.

"Pure Comedy," can be a tough and pessimistic listen at first glance, especially after being bombarded with the latest breaking news. But digging deeper, this is an album not just about the now but about the "what comes next." It's about the hole that we're in, and for the majority of the album, it seems inescapable...until the very end. And maybe that's the hope. This is a soft, gentle album. Lush pianos, rich guitars, strings, horns...it's all done in a very classic rock manner with a smattering of other genres tossed in here and there. But it's the subtext of this album that makes it a winner. Everyone loves a happy ending, and it may seem that in our world right now, that it's hard to find one, or that there might not even be one for any of us. But Father John says look, here are the facts. Things are pretty absurd, pretty crazy, and very scary right now. But treasure the love in your life, for it's there that you will find your escape and your meaning.