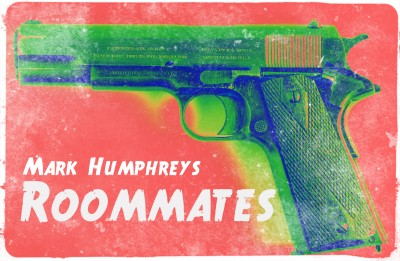 American Repertory Theater of WNY will kickoff the 2017-18 theatrical season with a production of award-winning local playwright Mark Humphrey's original weaving tale of dishonesty and loyalty in his work ROOMMATES. Directed by Artie nominated Drew McCabe, this original works features ART/WNY alumni Michael J Starzynski (THE UNDERPANTS, MR PUSSY) and Victor Morales (who exception work was seen in the company’s production of THE GUYS and THE CRUCIBLE) with ART/WNY newcomer, Brett Klaczyk. ROOMMATES is schedule to open on September 7th and run to the 23rd.

“Great stuff, immediately felt like a Seijun Suzuki film on stage to me”, said director Drew McCabe on Humphrey’s original piece. Suzuki, best known for his 1966 film Tokyo Drifter, pioneered a genre of B-movie gangster movies and inspired contemporary film-makers like Quentin Tarantino. McCabe (who has received an Artie nomination for his direction on the ART/WNY March 2016 production, THE HOUSE OF BLUE LEAVES & RED CLAY) returns back to ART/WNY for another directorial gig and has assembled a great ensemble including Victor Morales, Michael J Starzynski and Brett Klaczyk for this time around.

Without giving away too much on his work, “ROOMMATES is about two men who have to stay overnight in the same apartment," says Humphrey. One man is a former stock broker who owes money to a gangster, the other has been sent by the gangster to keep him "safe." Humphrey’s overview of what the piece means to him and audiences gives ROOMMATES substance instead of some sort of criminal and victim predictability. “The main focus of the piece though, is what we dreamed of becoming, as opposed to what we became” concludes Humphrey.

American Repertory Theater of WNY's Artistic Director Matthew LaChiusa views the relationship between the company and Humphrey's works as a continuing creative feature in ART/WNY’s theatrical season. "I've always enjoyed Mark's skills as a storyteller and his ability to write for theater," says LaChiusa. "His works fit right into the artistic vision of the company and throughout the past few seasons reflects exactly the type of works we love to present at ART/WNY."

Humphrey's list of works at the company include two one acts submitted to the Local Playwright's showcase and the most recent Artie Award-winning production of his work LITTLE ROBERT based on the final evening spent by legendary blues player, Robert Johnson. "I still regard that work (LITTLE ROBERT) as one of the top-ten productions at ART/WNY," LaChiusa on the successful history of Humphrey's works. "The acting of Robert Insana and Hugh Davis, set and lighting design, direction by Gail Golden were outstanding. Overlooked, as par for the course when it comes to smaller budget theaters, but outstanding nonetheless."

Mark Humphrey's ROOMMATES will open on September 7th and run through the 23rd as part of the Curtain Up! celebrations. All showtimes are at 8:00pm at ART/WNY's 330 Amherst Street performance space.