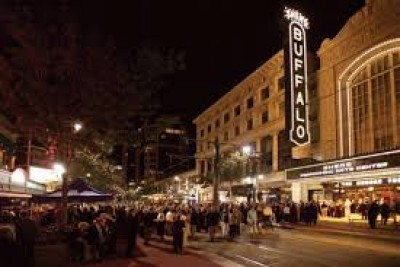 In its 36th year as the opening celebration to Buffalo's professional theatre season, Curtain Up! is boasting 11 theatre productions this year, and the biggest and best street party in the city!

The list of shows for the September 15, 2017 celebration is available at: http://tda-wny.com/curtainup/curtain-up-schedule/

NEW LOCATION!  The annual black-tie Curtain Up! Patron's Dinner Gala will return to Fountain Plaza in the 500 block of Main Street, where guests will enjoy a sumptuous 3-course meal complete with wine and live music by Jazz Cache under an elegant white tent.

NEW OPTION!  The new Greenroom Gala at Expo Market, 617 Main Street, is a little less formal and features 2 hours of open bar, hors d'oeuvres, the music of Joe Donohue and the cheeky entertainment of the fabulous Stripteasers.

This is what Curtain Up! Is truly all about - the opening night of one of the most incredible theater industries in the country.  Choose from 12 extraordinary shows - Comedies, Dramas, Musicals!

A crazy, B style, horror movie, recently filmed in Buffalo, is now a campy new musical for the stage. In a world that prices breast size over accomplishments, Betty Downer impulsively books enhancement surgery with the evil Dr. Libby Niptuck ... but all hell breaks loose as singing, dancing, musical mayhem is brought on by a set of monstrous mammaries!

As long as Ellen doesn’t openly acknowledge that husband Butch is a cheater or son Bill is gay, they’re just . . . not. As long as Bill doesn’t introduce Marq to his mother, he can avoid commitment. It takes fantasy, farce, and one fabulous makeover before the truth flies free, and mother and son discover just how much they have in common.

Three slick and stylish young bohemians in 1930’s England take us on a delicious romp only Noel Coward could conceive. Vivacious interior designer Gilda; successful playwright Leo; and starving artist Otto are all entangled in a tempestuous love triangle that flaunts society’s conventions. Although this offbeat trip attempts to force their lifestyle’s triangular peg into a round hole of respectability, their shameless carryings-on make for an uproarious rollercoaster of a comedy you’ll love.

Declared one of the funniest Broadway musicals of all time, the record breaking Tony award winning musical “The Producers” is the Broadway hit based on the Mel Brooks classic film of the same name.

A high-energy musical adaptation of the 1980 hit movie.

Tony-winning Peter & The Starcatcher upends the century-old story of how a miserable orphan comes to be The Boy Who Would Not Grow Up (a.k.a. Peter Pan). Featuring a dozen actors portraying more than 100 unforgettable characters, Peter & The Starcatcher uses ingenious stagecraft and the limitless possibilities of imagination to bring the story to life.

A down on his luck middle-aged man inherits an apartment in Paris and must live with the elderly woman that has inhabited it for decades. There, he learns friendship, falls in love, and must finally deal with the death of his father.

A young couple, struggling with their future, arrives at a mysterious B&B in Gettysburg, PA—one brimming with watchful objects, where certain rooms are not to be entered and certain things are better left unsaid. Annie Baker (Circle Mirror Transformation, and Pulitzer Prize-winner for The Flick) flirts with the supernatural in her latest work, a reflection on what we know and what we think we know, on strained connection and pervasive loneliness, on what we carry with us and what we leave behind.

Written in 1935, Lewis' tale tells of a huckster politician who buys the presidential election and proceeds to turn the U.S. into a facist dictatorship.  The stage adaptation developed by the Berkeley Rep Theatre in 2016 stays in the spirit of the original while adding an element of campy farce with dystopian horror.   A chilling warning that is needed now more than ever.

Every performance of The Fever is a collaboration with the audience that tests the limits of individual and collective responsibility, and our willingness to be there for one another. Placing the audience center stage, The Fever becomes an observation of human behavior. The group performance displays how we organize and care for the bodies around us.

This touching comedy revolves around Lily Harrison (Loretta Swit), a formidable retired woman living in St. Petersburg, FL who hires a young, acerbic dance instructor (David Engel) to give her dance lessons--one per week for six weeks. While dancing the Tango, Waltz, Swing, Foxtrot, and Cha-Cha, a relationship blossoms into a beautiful friendship as they learn to overcome their outward differences and discover an unlikely but profound connection.

Curtain Up! 2017 continues from 10PM-1AM with a FREE Street Party on Main Street.  And this year we've added a block to the festivities! The 500 and 600 blocks of Main Street will come alive with multiple bands, circus artists, magicians, and (of course) food trucks.  And don't forget to catch the fireworks display in the center of it all!

Among the attractions will be JJ Swing in the Tent at Fountain Plaza, LeeRon Zydeco, 12/8 Path Band, Wandering Violinist David Adamczyk and Street Magician Mike Seege.

In its 36th year, Curtain Up! has bcome one of the most important cultural events of the year, celebrating our theatre community which continues to thrive as an important catalyst to the resurgence of Buffalo.  Join us this year for all three acts!