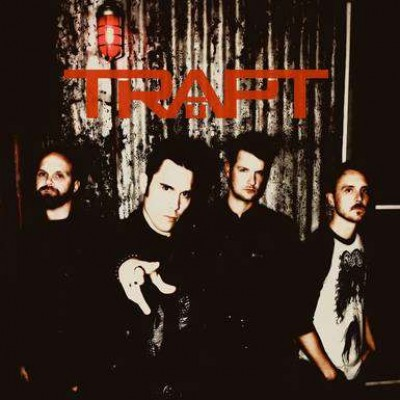 This Alternative-Rock band got its start in Los Gatos, California USA, in 1997 when singer + guitarist Chris Brown met bass player Peter Charell at school, soon after they hooked up with guitarist Simon Ormandy. Brown and Charell wrote songs and assembled a band to play their own material at The Cactus Club, sharing bills with Papa Roach and Dredg. At that time Trapt recorded a do-it-yourself CD which was followed by a second independent LP, "Amalgamation", in 1999. They recorded new material every chance they got including a third indie-CD titled "Glimpse". In the summer of 2001 the band's long-time drummer parted ways with the group; Aaron Montgomery joined Trapt to play drums before the quartet put together a showcase on September 11 that same year, shortly thereafter Warner Bros. offered the band a recording deal.

On November 22nd, 2002, the band released Trapt, along with the single "Headstrong". "Headstrong" became a fantastic hit, reaching #1 on alternative charts and #16 on pop. Follow-up singles "Still Frame" and "Echo" (with a video featuring Michelle Trachtenberg) did respectably, although they never reached the heights of "Headstrong". "Headstrong" became the official theme song of WWE Bad Blood for June 2003. Trapt eventually hit platinum. After more than one year an EP followed on March 30th, 2004, that included a new song called "Promise" along with live versions of "Made Of Glass" and "Echo".

The band returned in 2005 with the melodic Someone in Control, which led to tours with bands like Nickelback, Chevelle, and Thousand Foot Krutch. A live album, Trapt Live!, arrived in 2007 on Nikki Sixx's Eleven Seven label. A year later, Ormandy parted ways with Trapt and was replaced by Robb Torres. Their third studio album, Only Through the Pain, followed soon after, produced by GGGarth Richardson (Nickelback, Mudvayne, Atreyu). For their fourth album, the band hired producer Johnny K (Sevendust, Disturbed, Megadeth), and in 2010 released No Apologies. A compilation album, Headstrong, was issued the following year on Cleopatra Records. It featured re-recordings of their singles, remixes, live tracks, demos, and a cover of Depeche Mode's "Policy of Truth."

In between releases, Trapt experienced a number of roster changes. Montgomery left the band at the start of 2012, replaced by Dylan Howard. Torres also left the band, his spot temporarily filled by ex-Atreyu guitarist Travis Miguel (permanent replacement Ty Fury was recruited in 2014). On 2013's independently released Reborn, the new lineup expanded their sound by adding synthesizers and samples, making it their most ambitious to date. The quartet returned in 2016 with their seventh album, the muscular DNA

Smile Empty Soul is a heavy alternative trio formed while its three members were still in Santa Clarita, California high schools. Led by singer/guitarist Sean Danielson, the band also included drummer Derek Gledhill and bassist Ryan Martin. After honing their sound with numerous hometown gigs, Smile Empty Soul began venturing to the Sunset Strip, and eventually passed a demo to Todd Parker of the Los Angeles indie ThroBack. That exposure led to a deal with Jason Flom's Lava imprint, which was expanding in the wake of early signee Kid Rock's white-hot success. The trio hooked up with producer John Lewis Parker, who was at the helm for their self-titled debut, issued by Lava in May 2003. With its screeching guitars and Danielson's rage-filled vocals, the album was indebted to the alternative sounds of the early '90s. Vultures, Smile Empty Soul's third record (the band's sophomore outing, Anxiety, was scheduled for release in 2005, but a split with Lava kept the album from seeing the light of day until the band released it through their own MRAfia Records label in 2009) hit the streets in 2006, and was followed by the aforementioned Anxiety. Their fourth full-length, Consciousness, arrived in 2009, followed by 3's in 2012.