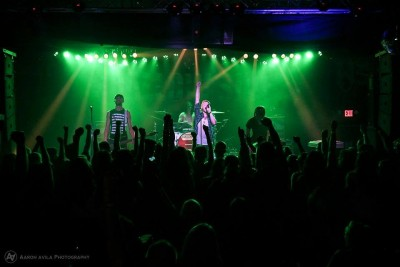 Rock is dead, they say? Hogwash. Don’t even bring up such an idea with the four-piece Cullman, Alabama-bred rockers Shallow Side, who have taken it to be their personal holy mission to spread the glory of modern rock & roll as far and as wide as they can to anyone who will listen. “The energy and excitement of rock & roll is missing nowadays, and we need it now more than ever,” believes Shallow Side’s frontman, vocalist Eric Boatright. “Our goal is that we want to revitalize that entire genre and remind the world how rock & roll can be such a strong force in everyone’s lives.”

Shallow Side garnered an immediate lifetime fan in Tommy Shaw, the Styx vocalist/guitarist who’s also the songwriter of “Renegade,” the instant he heard the band’s rabble-rousing cover of their signature song. There’s no doubt “Renegade” helped open the door for Shallow Side to make new fans. “We needed that ‘handshake’ with listeners who already love rock music,” Boatright says of “Renegade,” which became both a rock-radio staple and a YouTube sensation when it was released as a single in late 2016.

Shallow Side is a rock band through and through. Combining the driving rhythms that push the core of pop music with aggressive guitar work, carefully constructed bass passages, and a voice that smashes into focus atop the platform laid down by the music, Shallow Side has crafted a new sound with the same "no holds barred" attitude that has kept rock n roll alive and kicking since its inception. Shallow Side continues to push the envelope, providing a viable outlet for anyone looking for the future of hard rock.

It's not often a platinum selling band with a #1 song in the US announces they're going on hiatus, but that was the case when My Darkest Days singer Matt Walst was given the opportunity to front Canadian hard rock legends, Three Days Grace.

"Never Say Die started in the front passenger seat of the My Darkest Days BandWagon... we had a relentless tour schedule," says Reid Henry (Lead Vocals/Guitar). "During over night drives I'd squeeze through a small window to the front of the bus and stay up writing, singing, and occasionally wedging my laptop on the dashboard to record."

Over the next year, Never Say Die remained a studio project of Reid and My Darkest Days bandmate, Brendan McMillan (Bass).

In early 2016, Reid's demos caught the interest of Producer/Engineer (Evans Blue, Parabelle, Scarlet White) and drummer (Age Of Days), Mike Langford. The band began recording an EP that evolved into an album. With the addition of Mike's long time tour mate, and singer/songwriter Dane Hartsell (guitar/vocals), what started as a dream for Reid, Never Say Die has quickly become a reality.

With their debut album set for release early 2017 and plans to tour Canada/US, it's apparent Never Say Die has positioned themselves to continue where My Darkest Days left off.