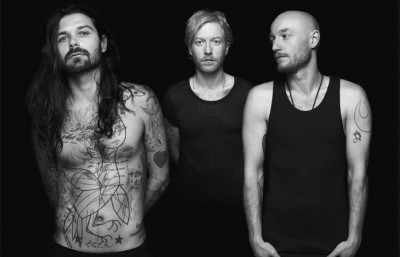 No matter what Biffy Clyro were dreaming of when they bunked off school at the age of fifteen to play their first ever gig, they surely couldn’t have forecast what they’d achieve almost two decades later with their 2013 double-album ‘Opposites’. The scope of their ambition was richly rewarded with their first chart-topping album in the UK; headline sets at festivals including Reading and Leeds; and tours which spanned the entire globe. It was everything they could’ve hoped for.

At the close of the album’s campaign, the big question that remained was simply: how can you follow that? “The only way to follow a double-album is to entirely revolt against it,” laughs vocalist/guitarist Simon Neil.

Collectively, Biffy Clyro – completed by James (bass) and Ben Johnston (drums) – knew that their forthcoming set ‘Ellipsis’ would represent the start of a third trilogy of albums after the raw creativity of their early releases for Beggars Banquet and the hugely ambitious ‘Puzzle’, ‘Only Revolutions’ and ‘Opposites’. “The main manifesto was to descale ourselves and break every single habit that we had,” Neil asserts. “It was very important that we didn’t back into the default settings of being a three-piece rock band. We wanted to rewire Biffy and turn it on its head.

”For starters, the band’s creative partnership with producer Gggarth Richardson came to an amicable, pre-planned conclusion with Rich Costey – chosen on the strength of his work with Boots, Esperanza Spalding, Mew and Fiona Apple – stepping in. That idea of reinvention even extends to the album’s artwork with a stark and minimalist design taking the place of the late Storm Thorgerson’s eye-catching, high-concept imagery.

Fresh influences abide throughout. Sometimes they’re easy to spot – the driving rhythms of ‘Friends and Enemies’ evokes Tears For Fears circa ‘Songs From The Big Chair’, and the bleak/beautiful dynamics of Deafheaven are prevalent in the explosive coda of ‘In The Name of the Wee Man’. Mostly, however, they’re
conveyed from a mentality rather than a specific sound.

Neil credits the “complete no compromise” stance of Arca and the fearless production techniques heard on records from Kanye West, Kendrick Lamar and A$AP Rocky as things which have impacted on their new heavily textured, bass heavy wall of sound, which adds everything from a country twang to sampled handclaps and even a children’s choir. “You can be heavy without being metal,” he summarises. “We definitely took sonic influences from a lot of
hip-hop for this record, but we tried to present it with the attitude of a rock band.”

In keeping with that attitude, ‘Ellipsis’ brims with a palpable Biffy Versus The World defiance. Much of Neil’s lyrical focus was aimed at turning his “anger and frustration outwards… this is the first time that I’ve forced my intensity at people who let us down” and also at those “people who come out of the woodwork with really strong opinions on what we’re doing. No-one knows this band as well as myself, Ben and James.

We’re the ones who have lived and breathed it.”Many of the tracks rage against any forces which have the potential to unsettle the band or its individual members:

“Trying to shake the truth out of someone who feeds you a line and really they mean something else” (‘On A Bang’); “Those close friends you have that somehow end up making you feel worse” (‘Friends and Enemies’); “It’s pretty much just ‘fuck you’ – a lot of people didn’t think we’d get to our second record, let alone our seventh”

(‘Wolves of Winter’). An unexpected side effect of the success of ‘Opposites’ was a brutal aftermath. At the start of 2015, Neil hadn’t
written a song in approximately 18 months. Perhaps that wouldn’t have ordinarily been a problem, but he soon found that the spark just wasn’t there. It became a vicious circle: writer’s block provoked a complete loss of confidence which in turn initiated an identity crisis, and then a self-defeating fear of failure in which he truly thought that he’d never be able to write again.

“It manifested itself in panic attacks. I didn’t take my dressing gown off for about eight weeks and I didn’t leave home,” he says over a year later, with all the drama of someone who’s talking about a mundane daily event. “I felt weak and vulnerable. It’s not a very rock ‘n’ roll thing to say.”Such experiences, he acknowledges, are issues which all manner of people from differing backgrounds have to deal with at certain times in their lives. Like with previous challenges, Biffy Clyro rallied around each other with his bandmates part of a collective of friends and family who helped to slowly coax Neil out of his shell. “We’ve been in each other’s lives for thirty years.

From the highest points to the lowest points, we’ve been there for each other. It’s like any group of close friends: just we happen to be in a band.”Neil and his wife headed to California for a few months of west coast dreaming as he sought an escape. “Ironically
as soon as I did that, all of the songs started to come,” he states, his relief still evident. Back home in Scotland, James and Ben helped to mould these sketches into Biffy Clyro songs during a productive and intense six-month spell of creativity.

Some of these cathartic songs address how these problems impacted upon his relationships, especially with his wife. Most notably, ‘Re-arrange’ is a love song but also an apology for those times where Neil would “be a terrible person to be around, because I’d suck the energy out of the room.”

Such themes continue in ‘Howl’ (“those moments when you can see your temperament changing as you’re morphing into something you don’t recognise”) and ‘People’ (“you have to come to terms with the fact that your life can’t be exactly what you wanted”), while‘Medicine’ explores his attempts to conquer self-medication as a cure for chronic insomnia. Seven albums in and Biffy Clyro are still looking towards new horizons: to tour fresh countries and to further travel to places they’ve only previously touched upon. But the biggest thrill still comes from capturing that lightning-in-a-jar moment in which a great song suddenly emerges from seemingly out of nowhere.

Despite the challenges and growth along the way, the fifteen-year-old members of Biffy Clyro would realise that their subsequent selves aren’t so different after all.

It might sound strange, but it takes some serious soul to discover rock music’s spirit and an absolute animal to find its superhuman funk. Luckily, the modern listener has Spirit Animal to turn to for all of the above.

The NYC-based band’s 2013 single, “The Black Jack White,” premiered on MTV Buzzworthy who praised the song’s dirty bass, stripped down drums and shouted group lyrics as “an animal all its own.” This summer, the video for the song debuted on mtvU where it has been two months in rotation as of this writing. On last year’s EP, This Is a Test, the band masterfully melds decades of disparate elements in search of music at its most carnal, anthemic and party-ready. The heavy riffs and pounding rhythms of their funk, psychedelia and pop create a sound seemingly from the ether, but grounded in the diversity of four gents who are gifted at the dying art of leaving it all on the stage. This is what led Last.fm to label them “hands down our favorite rock n’ roll discovery of 2012.”

Spirit Animal frontman Steve Cooper is a D.C. area-born talent, uncoiling a multitude of skills that go beyond the realm of melodies, production and body sweat into the worlds of cheffing and web content craftsmanship. Cooper, whom KCRW calls “unbelievable,” met Spirit Animal bassist Paul Michel in the nation’s Capitol in 2002 where the Libyan-born Army brat spent much of his youth. Michel has toured with a half dozen bands including Georgie James (Saddle Creek Records) and it’s his bottom — he’s the best dancer in the band– that propels This Is a Test into otherworldly realms of low end theory. Upon that astral plane, guitarist Cal Stamp provides sterling pop sensibility and face-melting solos that recall an era when Guitar Gods were the real Pop Stars. Battening down the hatches is drummer Ronen Evron, an Israeli transplant by way of the technically unrivaled Berklee College of Music in Boston. The fearsome foursome adds up to an organism with one mission, and one mission only.

“Rock n’ roll embodies the whole of modern music’s spirit, but you can’t have one without the other,” Cooper says. “The roll is the part people sometimes forget, and that’s sad since that’s the party part.”

The list of influences that Spirit Animal rolls with is expansive, as pieces of familiarity peak out behind a smorgasbord of original ideas. Their new school nonchalance is balanced by a fervent bombasticism reminiscent of early 90s era Red Hot Chili Peppers. On the new EP, “Love Crime” blends Cooper’s soulful expressions with a bar brawl hook that reflects the most universal of relationships gone bad. Elsewhere, there’s David Byrne-cum-Mike Patton soapboxing over the art throb of “Lead!” The only thing more trippy than Stamp’s guitar solo on first single “Crocodile Skins” is the forest Shaman enlightenment of the track’s music video (shot shirtless in 22 degree weather, mind you). By the time This Is a Test delves into a tried and true na-na-na-na-na sing-a-long (on “WTF”), it’s obvious that this band can and does do everything music fans could ask for.

Live, the band is at once manic and precise with a non-stop show full of careening melodies, call-and-response choruses, and lots (and lots) of the aforementioned body sweat. Spirit Animal have been called an “unmissable live act,” and it’s been said their “furious energy and fierce musicianship” are poised to not only stand the test of time, but help the masses re-live it.