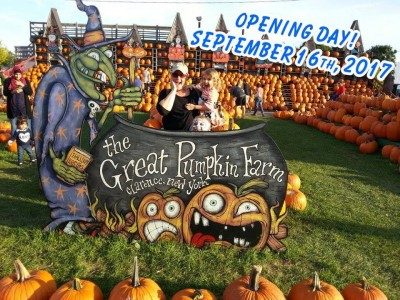 Young and old who attend the 22nd annual Great Pumpkin Farm’s Fall Festival will enjoy the thrill of the amusement rides, hayrides and corn maze. All can pick out their pumpkins, eat homemade donuts, pies, cookies and pastries, select the perfect Halloween decorations and watch special events, such as the World Pumpkin Pie Eating Contest, the Trebuchet Contest and Oinktoberfest, New York State’s BBQ Cook-off – and so much more!

This year, the Great Pumpkin Farm has declared opening weekend – September 16 and 17 – to be Armed Forces Weekend, in collaboration with WNYHeroes, Inc.  The regular admission fee will be waived for military, police and fire department personnel who present proper identification to WNYHeroes representatives at the gate; they will also be permitted to bring one guest for free. The first 200 military, police or fire personnel through the gates on opening weekend will receive a goodie bag that will include gifts from The Great Pumpkin Farm, WNYHeroes and Festival sponsors.  A special happy hour will take place at the Witches Brew (inside the Pumpkin Palace) from 2:00 to 5:00pm on both Saturday, September 16 and Sunday, September 17. There will be live music and a military veteran will serve as bartender. All tips will go directly to WNYHeroes.

Throughout the seven weekends of the Fall Festival, WNYHeroes representatives will be on hand at an information booth in the Event Center at the Great Pumpkin Farm.

In addition to Armed Forces Weekend activities, the opening weekend of the Fall Festival will also include animatronic dinosaurs, Vinnie and Teddy, in the Corn maze (Noon-4:00pm both days) and Sylvia Fletcher & Friends Ventriloquism (three shows a day; free with Festival admission). On Saturday, September 16, the Buffalo & Erie County Public Library’s Bookmobile (Library on Wheels) will be on site from 10:00am to 5:00pm, with crafts for the children and story times throughout the day. Visitors can check out library materials and apply for a library card.

Coupons with paid admission include $1 off the Corn maze; Panning for Gems; Book Barn; Zombie Train; Jumbo Pillows; Pumpkin Slingshots (not available October 22) and, in October only, Horse-drawn Hayrides.

Discounted tickets can be purchased at all Buffalo & Rochester Wegmans locations.

For More Info:          Complete event information is available at www.greatpumpkinfarm.com.

WEEKDAYS AT THE GREAT PUMPKIN FARM:

The Great Pumpkin Farm will be open weekdays, September 18 through October 31, from 10:00 a.m. to dusk. There is NO admission on weekdays, except on Columbus Day, October 9. The Pumpkin Palace is open weekdays and features Halloween decorations, a bakery and candy store. Guests can purchase pumpkins; cornstalks; gourds; apples and cider. There’s also a petting zoo, hay maze and playground. Group tours are also conducted during the week.

About the Great Pumpkin Farm and the Fall Festival

Since 1996, when it first hosted the World Pumpkin Weigh-off and was included in the Guinness Book of World Records for the first 1,000-lb. pumpkin, the Great Pumpkin Farm in Clarence, New York has grown.  Its annual Fall Festival is Western New York’s largest fall family event in the region, and includes popular events such as OINKtoberfest, New York State’s Official BBQ Cookoff; the Pumpkin Trebuchet competition and the Pumpkin Farm Olympics.  For more information on the Great Pumpkin Farm and its Fall Festival, visit www.greatpumpkinfarm.com.