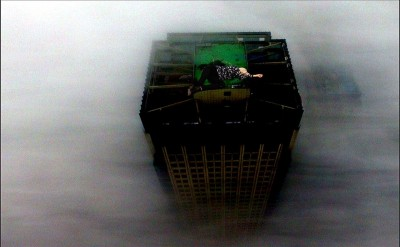 Squeaky Wheel is proud to present an augmented reality performance by Buffalo based media artist Yvette Granata and San Jose based artist and performer Andrew Blanton. For two consecutive evenings the artists will install and perform in a visual, sonic performance that transforms the grand halls of Silo City through emerging technologies.

Can augmented reality be used as the creation of new forms of collectivity? Or does it produce new forms of spatio-temporal apartheids? Through their respective approaches to performative augmentation and mobile media, Andrew Blanton and Yvette Granata’s works inquire into the manner in which augmented reality and media performance can be ...framed as a critical dialogue between the alliances and the vacuoles of mobile realities.

Interpreting augmented reality as performance space, their works are audiovisual performances and variations on collective and un-collective space. The works form a critical dialogue on augmented life, collecting performances of sound and image — an ambient group text message, a vertical disorientation through camera-apps, a hand-held sonic immersion, and a modulation of ambient feedback of the Silos.