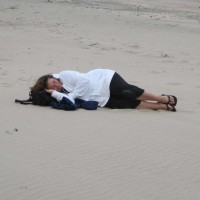 Lesa Quale Ferguson is a writer, website designer and manager, photographer, social media addict, and as most importantly as her sons emphatically state, "a stay at home mom". When not employed in the home arts, she has created media for local nonprofits including Trinity Buffalo, Adoption STAR, the Valley Community Association, and Sail Buffalo. She designs and manages her own website, Talking Iguana which is currently under construction.


A restaurant legacy looms large within my family. On just the paternal side, there are two notable Buffalo restauranteurs. Each of them crafted a restaurant/bar that would likely make it into the Buffalo Restaurant Hall of Fame,… more »

"I Spy" with the Mayor


“I spy with my-little-eye the Mayor coming through the door.” This was an attempt to wrangle and distract my four-year-old with the I Spy game. I caught him between my  knees, one arm acting like a gate. “What… more »


Once upon a time, one cold winter when I was 14, I moved from Ashland, Oregon where I lived with my mother, to Buffalo to be near my father. Over the course of the previous year, my father had unexpectedly left Northern California… more »


My nana (father's mother) wrote me a series of letters over the course of a year, one for every month in which she told me about her life in Buffalo. My favorite portions of these letters were of her childhood and the neighborhood… more »


When I was a teen, Buffalo’s greatest tourist attractions were robust home cooked meals with a galley-full of aunts, uncles, cousins, greats and grands; tradeable Sheriff's cards (without photos) for easy underage drinking;… more »


My nana (father's mother) wrote me a series of letters over the course of a year, one for every month in which she told me about her life with food. She loved cooking and had given me all her recipes to sort and print. More than… more »

Bullied on the Bus


My eight-year-old son, Sam,  stumbled off the school bus into my arms. Sam usually skips, happy to be on his way home, happy to be outside. Happy! My pulse quickened as soon as I saw his sad face. I wrapped my arms around… more »


Citybration and BuffaloVibe recently announced they will host a party so behemoth that it needs its own tower - the Seneca One Tower that is. This centerpiece of the Buffalo skyline has been vacant since 2013 but not for… more »

South Buffalo And The Fenian Invasion


Every month or so, Lark arrived at my brother Scott’s tavern wired with the enthusiasm of his latest venture. Tonight, he caught me at the corner of the bar with an armload of dirty dishes destined for the the kitchen.… more »

No Substitute For Buffalo Fish Fry


One Friday, in the Seattle, Washington, seafood restaurant where I waited tables, a customer pushed away the menu and asked me, "Can I get a fish fry here?" I pointed to the bounty of fresh seafood on the menu, but he needed… more »


I pulled the car over to the curb and berated myself. Late again. Lost again. But, not in that fun “How do you Solve a Problem like Maria” Sound of Music sort of way. At 36, the charm of being “A flibbertigibbet!… more »


At the Erie Basin Marina, while a spring storm ballyhooed across Lake Erie, my now husband, Dave, asked me to marry him. The meteorologists promised a tornado but the storm didn’t quite reach those proportions. After… more »


I'll charm the air to give a sound, While you perform your antic round~William ShakespeareMacbeth, Act iv. Sc. 1 March 15th, 2000Seattle, WashingtonI live in an apartment that the landlord originally built for visitors to the… more »

I Did Not Get to March


I did not get to march. Oh, how I wanted to. A friend had invited me to stay with her in Washington DC where the Women’s March on Washington took place on January 21st. I passed. I wanted to march at home among my… more »

Sail Buffalo Cruises to the Bahamas


In December, Skipper and Director of Operations of Sail Buffalo Pierre Wallinder and his shipmates sailed the Pretender, a Tayana 37 cruising boat, from Deltaville, Virginia to the Bahamas. They landed at the Grand… more »


Cal’s eyes watered, his nose burbled, and his cough was so deep it sounded as if he had spent his three short years in a coal mine. I knew he was sick with a cold long before his body percolated and he proclaimed in that… more »


On my wedding day, before the ceremony, my future mother-in-law Joyce, pulled me aside. She cradled my cheeks in her strong, capable hands. This was not the first time she had done this. A few months earlier I was a patient in… more »


Last Christmas as a gift to me, my husband built a magic portal for our front yard garden. He wouldn’t have called it that when he staked it into the ground this spring. Then, we called it a Little Free Library. The Little… more »


I have experienced as many Thanksgivings as there are cards in a deck. In the first six years of my life, my parents took me (and later my brother) to one or the other (sometimes both) of my grandparents’ homes for turkey… more »

The Election, the Zombie Apocalypse, Jaws, and the Bethlehem Steel Fire


The morning after the election, I drove my sons to school like any other weekday. My ten year old son Sam slumped in the corner of the backseat. He had sulked his way through the morning and into the car. I was confronted with… more »


Cranberry sauce. Stuffing, sweet potatoes and squash. Pumpkin pie. And a unique opportunity to loudly and proudly give thanks and give back. Fortunately, there are many opportunities in WNY to share our bounty… more »


Everyone knows what Jesus did 2016 years ago, but sussing out what Jesus might be inclined to do in this day and age is a much tougher proposition without getting steeped in politics and agendas. As a sworn agnostic, please do… more »

A Haunted Walk in Perrysburg


At that moment, we were less a married couple deciding what to do with our afternoon, and more like two gunslingers from the old West in the midst of a showdown. We had squared off. On his side there was law, order, good sense;… more »

Divorce, Grape Juice, and the Mob


My brother and his wife are in the process of divorcing. Anyone who knows me even a little, knows that I’m wildly protective of my family, especially my brother. I would have made an excellent soldato (mafia soldier). I… more »


It's National Hispanic Heritage month. From September 15 - October 15 the contributions made by Hispanic and Latino Americans to the United States and the hispanic heritage and culture are celebrated. Why now?… more »


The World’s Largest Rubber Duck has left the harbor. Dubbed "Mama Duck," this yellow, vinyl, six story-high duck floated on a steel pontoon for three days in our communal bathtub, aka the Buffalo Harbor. This Mighty Duck… more »


I don’t love I Love Lucy. Blasphemy! And I should love this sitcom prototype. I Love Lucy revolutionized television. And, I love TV, especially sitcoms. I do LIKE I Love Lucy but generationally-speaking, I was out of sync.… more »

National Farmer's Market Week: Meet Me at the Market

Sunset Bay: Now and Then


I was 9 nine years old and he was working at the/Metuchen Ford plant assembly line/Now he just sits on a stool down at the Legion hall/but I can tell what’s on his mind, Glory Days. ~ Bruce Springsteen Summertime, my family… more »

Keeper of the Western Door


In April, 2016 renowned author Louise Erdrich took the stage at Kleinhans as part of the Just Buffalo's Babel series and welcomed the audience to Native Land. She was not referring to the 9.5-acre parcel of land in the city of… more »

Gardening from Seattle to Buffalo; or, What I Learned After My Gargoyle was Stolen


The first spring we moved into our house, I tore up the grass in the front yard. I liked to say I “busted the sod” as if I were a 19th century pioneer woman on the plains and not a South Buffalo gal returning to her… more »


As a parent of a school age kid, there is an ambient sound I hear this time of year. The sound weaves into the seasonal landscape like the first hatch of crickets. It becomes as synonymous with the environs as the hum when… more »

The Valley vs the First Ward


The Verizon strike put me on “Red Alert”. Role reversal - it was time for this stay-at- home mom to bring home some bread. The illusory job had two requirements: to be quickly procured and flexible enough to accommodate… more »

The Diary of an Agro-Tourist: My Time in the Sugar Shack


“The small landholders are the most precious part of a state “ —Thomas Jefferson It’s a tale as old as time - the year begins in the spring inside a sugar shack and ends 9 months later inside a nursery.… more »

STRIKE - 7 Ways to Support Workers on a Picket Line


At the mere mention of a strike, I take to my bed. This has become a family joke. Whenever I get that shock of cortisol and adrenaline, I pull the covers over my head and hide for as long as it takes. “Take to my bed”… more »


Unlike in most garden walks, any resident can exhibit -- and over 340 do. There are no admission fees. There are Japanese gardens, English gardens, Russian gardens (i.e., barely controlled wildernesses) and what I would call… more »

Groovin' at the Broadway Market


… it’s places like this … where we get to know each other, we get to understand each other … and we get to respect one another... ~ Brian Higgins The 2016 Easter season at The Broadway Market opened… more »

Sail Your Own Ship


It’s spectacular to watch your child do something that you have only read about. The few times I have sailed, I either heaved with nausea or drooped with medication. Even without chronic motion sickness, the opportunity… more »