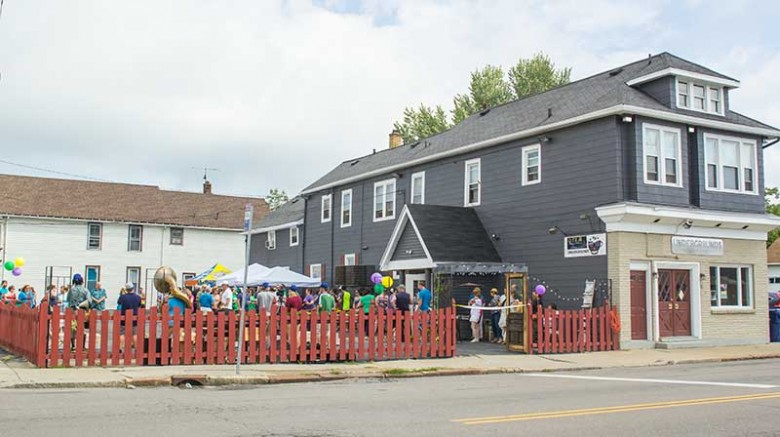 Anticipating a latte in the morning provides reveille for me - a melodic call to get out of bed, to attend, and to await the day’s formation. Usually, the day’s formation includes a notebook, a pen and a trip to the coffee shop. The difference between a latte and mere cup of coffee: that same bugle blares, but inches from my ear. A latte comprises two shots of espresso followed by steam milk frothed to perfection by a master barista. Espresso blends deliver a deeper, stronger, and surprisingly, less caffeine-intense roast than regular coffee. Foamy milk soothes the acidic twist a cup of coffee often deposits on the stomach. To add to the magic, a heart, a dolphin or a peace sign may be sculpted into the froth.

Since I moved to Buffalo, my latte attachment has come under fire. Family and friends have rendered me defensive. My latte nemeses scoff at the price, portion, and the travel necessary to secure the optimal latte. Their contempt persuades me not. Neither bribes nor propaganda changes my mind, “Stay here” they say, “I have a pot of Folger’s Best brewing.”

I enjoyed my first latte in 1986. Following my move from Fredonia to Seattle, a new friend escorted me to a small coffee house. We attended a summer class together at the University of Washington (called U-dub in the local lingo to which he was orienting me). He was handsome, older, learned, and interested in Shakespeare, classical music and art. I was fast becoming more acolyte than friend. He described a latte to me and told me there was another one of these Starbucks at the Pike Place Market. He said, “Espresso is becoming a thing here.” One latte later, I joined the revolution.

Every year, I would travel to Buffalo to visit my extended family. During the '80s and early '90s, Buffalo was an espresso wasteland. At one point there was a place in the Galleria Mall - I can still taste the astringency of the beans and feel the bloat of too much warm milk in my belly. My uncle took me to a place on the west side, Roma, where I enjoyed a passable latte but by the following year it had closed. Many cafes have come and gone. My family never provided good intel on these guerilla espresso shops. And, some tried to indoctrinate me into that Canadian cornerstone of coffee in Western NY - Tim Hortons.

Tim Horton’s sells Arabica medium roast coffee, or what it is known in the trade as legal crack via the bean.

What impelled me to don my revolutionary beret against the franchise is that the people who frequent it aren’t happy that Tim Horton’s has become ubiquitous, a store on every corner. They still want to patronize the local coffee shops but insist on a Tim Horton’s style of coffee - cheap, scalding, and fast.

As a transplant, I wanted to fit in and Tim Hortons, if nothing else, is convenient. After a couple months under this new regime, my tongue was blistered and my stomach lamented with a burgeoning case of GERD. I surrendered and retreated back to boot camp - Starbucks.

In 2001, I frequented a Starbuck’s outpost in Blasdell. Cafes should run along the front lines of cities. Can you imagine Gertrude Stein and Ernest Hemingway at a cafe adjoining Target? When reveille plays, you look for your morning formation and here in the suburbs it seemed more big-box store than the Great American Novel. Joann Fabrics was next door. I took up knitting. I settled into an overstuffed chair, drank my double tall latte and, like an old soldier ruminating over his glory days, I tatted a scarf.

And then my mother arrived from Seattle. A friend told her there was a good coffee shop downtown. She walked me into Spot Coffee, marched over to the giant mural, pointed to the Space Needle, and with more joy than she could contain said, “The owner lived in Seattle for 20 years.” No one understands the powerful need for a morning latte more than my mother. She is my brother-in-arms. But, her mother … my beloved grandmother Betty … occupied her territory.

Lest you think this post is only about lattes, let me say that for those of us who have lived for long periods far afield of Buffalo and returned, we always bring back something from the new world -  a love of lattes, microbreweries / wineries / distilleries, sports teams, politics, inclusiveness, a religion - something that upsets the old world order. A clash of cultures results.

First, Betty did not want us frequenting Delaware and Chippewa. When I was a college student visiting for the weekend, as I left for the evening, she’d yell, “Stay away from Chippewa, it’s where the hookers are.” We attempted to dissuade her, telling her that Chippewa had changed due in part to the new coffee shop. She decided to see for herself. When she noted the price of a single cup of black coffee and two lattes, she all but lifted her arms and yelped, “HELP! HELP! I’m being robbed.”. Raised during the Great Depression, this sort of extravagance was nothing short of criminal. When she tasted my latte, she couldn’t believe we had traveled all over the city for hot milk and a thimbleful of coffee.

When you are as militant as my mother and I are about lattes, you know that a thimbleful of coffee and hot milk is transformed into the divine by the skill and artistry of a barista. And, yes you do tip them. They handcraft and serve to your specific taste. Starbucks employs the Rosie the Riveters of baristas; they work on an assembly line to make sure each drink is made to size, temperature and specification. In the latte world, local is better.

Over the years many good places have opened in the city, but not in South Buffalo where I live. South Buffalonians don’t want to pay for premium espresso, real milk and a handcrafted preparation. Even though my grandmother has long since passed away, her ilk still controls the bean in this part of town.

My mother sent me a text earlier this month: “Enjoying a latte at the new Undergrounds.” My mother is a terrific scout. “Undergrounds” resides not in South Buffalo proper but in the First Ward, our neighbor. At South Park Avenue and Hamburg Street, it is a short bike ride away. And South Park sports freshly tarred and painted bike lanes.

In this second wave coffee shop, no murals paying homage to Seattle decorate the walls. “Undergrounds” is owned and operated by a crew of First Ward denizens. They are following the theme of Buffalo’s resurgence – recycle and employ painful reality like a beloved, family-owned, funeral business that has shut down to create something new. Leftover bricks from the Erie Canal are utilized at Canalside, our beloved silos are reinvented as event sites. We don’t raze history, rather we incorporate. Undergrounds, a former funeral home, incorporates the Day of the Dead as a design motif. It boasts colorful murals and decor constructed with natural materials - wood, tin, and metal.

And the lattes - strong beans, topped with a festival of foam and a rich finish, always artfully made.

I introduced myself to owner Sara Heidinger who explained that she had left Buffalo for a few years. When she moved back, she wanted to replicate the walkable community and coffee experience she had enjoyed while she lived in Brooklyn. Identifying her as a kindred spirit, I asked about the espresso nemeses. How was she going to deal with those cheap-coffee-drinking-cats who would attempt to overthrow a higher priced espresso menu, or that gaggle of teens with a penchant for high fructose corn syrup and canned whipped cream, whose only goal was to get their giggle back. Rather than sympathizing, Sara squared off.

She would have none of my first wave rhetoric. Undergrounds may lure customers from different neighborhoods, but she and the other owners, Bill Metzger and Bridget Morris, want Undergrounds to be a neighborhood place. Carbones is next door. As a teen she worked there. What Carbones did for pizza, they intend to do for coffee. She doesn’t eschew the old guard, she invites them to belly up to the coffee bar.

“Undergrounds” offers a coffee called, “Just a Cup” which Sara’s father suggested. A simple, reasonably priced cup of coffee, it is one my grandmother would have appreciated.

Last week I reveled in reveille and ordered my morning latte in Undergrounds. Then, I learned that espresso maestro, Isaiah, is moving to the Pacific Northwest to pull espresso, attend school and enjoy an adventure. As a long-term latte enthusiast, I know first-hand the perils of losing a star barista. Will the latte lose its foam? The cappuccino its dry finish? Will a new recruit understand that craft and finicky customers are part of the joy? I wanted to speak up, to warn...

I sat down and took a sip of my perfect latte. Soothed, I contemplated. In the coffee revolution, from Sara’s generational viewpoint, I am now considered the old guard - cranky, middle-aged, clinging to the past and my way of doing things. Age, righteousness and fighting the good fight will do that to a person. Nothing to be done now, but wait and see how these whippersnappers handle the challenge. And more importantly, for today, await the morning formation.