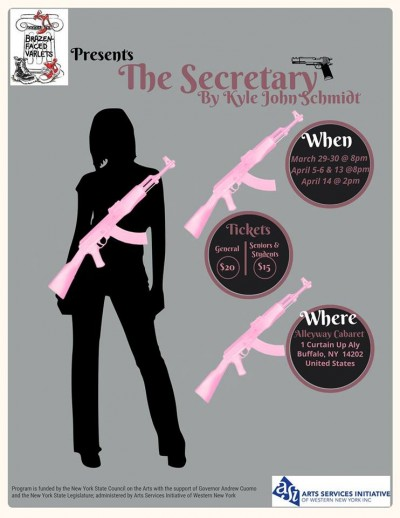 Ruby runs a small-town gun company that aims to protect women by helping them protect themselves. With products like The bridesmaid, The Babysitter and The Mallwalker, each of the company's guns is named after a woman who used a gun and saved a life--more often than not, her own. When an elderly secretary at the local high school confronts a threat in her office with six bullets, Ruby responds by naming her latest gun after the reluctant hero: “The Secretary.” But as production begins on The Secretary, guns start going off all around town--and no one’s pulling the trigger. THE SECRETARY is an offbeat comedy about safety, survival, and guns for a world that’s up in arms. Featuring: Heather Fangsrud, Stefanie Warnick, Davida Tolbert, Jeannine Giffear, Jamie Nablo, Caroline Parzy-Sanders and will be directed by Lara D. Haberberger. Costumes designed by Rachel Maggs. Performances are 3/29/19 to 4/14/19 at Alleyway's Cabaret Space - entrance on Main Street.