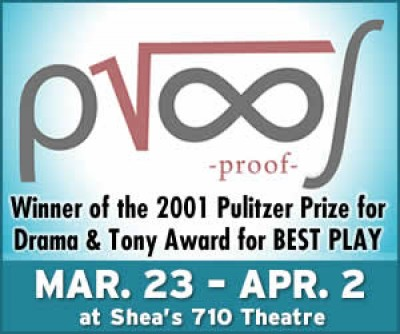 PROOF, winner of the Pulitzer Prize for Drama and Tony Award for Best Play, is coming to Shea’s 710 Theatre from March 23 – April 2. Tickets are on sale now. PROOF is produced by Buffalo Laboratory Theatre and is a part of the 2016-2017 Frey Electric Construction Co. Season at Shea’s 710 Theatre.

On the eve of her twenty-fifth birthday, Catherine, a troubled young woman, has spent years caring for her brilliant but unstable father, a famous mathematician. Now, following his death, she must deal with her own volatile emotions; the arrival of her estranged sister, Claire; and the attentions of Hal, a former student of her father's who hopes to find valuable work in the 103 notebooks that her father left behind. Over the long weekend that follows, a burgeoning romance and the discovery of a mysterious notebook draw Catherine into the most difficult problem of all: How much of her father's madness - or genius - will she inherit?

"...combines elements of mystery and surprise with old-fashioned storytelling to provide a compelling evening of theatre... [PROOF is a] smart and compassionate play of ideas." - NY Daily News

Some adult language and situations.

Shea's 710 Theatre is intimate 625-seat theatre presenting a wide variety of live performing arts including plays produced in collaboration with local and regional theatre companies as well as select plays from New York City.  The theatre is one of three operated by Shea's Performing Arts Center.