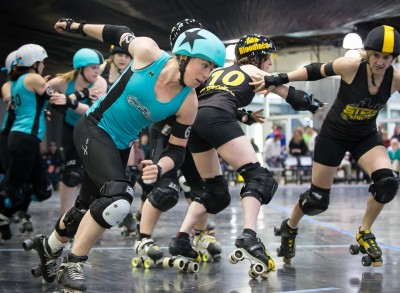 Come watch the Lake Effect Furies kick off their 2017 season against the 19th ranked Montreal Roller Derby girls at 7PM on March 25 at Buffalo Riverworks! This early season bout will be the Furies’ toughest of the regular season, and the adversity will test their ability to make adjustments while working with new and returning skaters. If you’ve seen a bout before, you’ve never seen it like this.

Buffalo’s Lake Effect Furies have been a study of consistency and continuity, steadily moving up the Women’s Flat Track Derby Association rankings and making four straight Playoff appearances from 2013 to 2016. Repeat Division 2 Playoff appearances in 2013 and 2014 pushed them up to Division 1 Playoffs in 2015 and with a strong regular season in 2016 the Furies secured another Division 1 invite. In September 2016, they entered a Playoff in Vancouver as a 9 seed and left as a 6 seed. Part of the 2016 success for the Furies was the result of their strong fan support which saw ticket sales and fundraisers spike to help cover their growing travel costs. With a potential playoff location in Malmo, Sweden in 2017, they will need that strong support from their hometown fans again.

Tickets can be purchased at the door or in advance at http://www.qcrg.net/event/PR/lake-effect-furies-opponent-tba/. $15 will get you in the door and $20 will get you prime-time seating. So grab your family and friends and head out to Buffalo Riverworks on March 25 to support your internationally ranked Lake Effect Furies!

The Alley Kats vs. The Devil Dollies (QCRD)

May, 2
- Get directions -
Reserve parking
GO