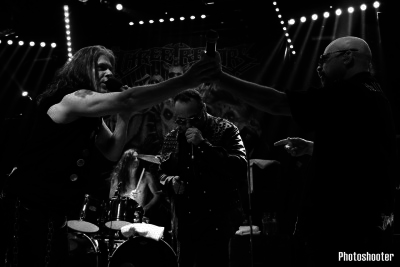 Welcome to THE THREE TREMORS heavy metal maniacs! You are cordially invited to indulge in howling wails and terrifying tales that will leave you at the edge of your seat and banging your head. This sacred idea from the golden age of heavy metal has been resurrected, and now this heavy metal urban legend is a reality.

“Three times louder than a sonic boom, three fingers on the hand of doom!”Forming THE THREE TREMORS band are- David Garcia, Casey Trask, Alex Pickard and Sean Elg, a group of highly skilled metal veterans from San Diego, California. They have forged the electrifying content of the project which will embark on a full scale promotional campaign supporting their album release with various formats and collectible memorabilia for the fans to take part of and own a piece of history.

With artwork ingeniously created by Marco Sasso, [DIO, HALFORD, ADRENALINE MOB, DEATH DEALER] www.marcsasso.com The debut album features 12 songs that depict monumental stories of time honored heavy metal themes as written by Sean Peck. three of the most respected, revered and relentless voices in heavy metal have joined forces FOR A BAND, NOT A PROJECT and woe to those who dare stand before it! What awaits you, are neck breaking heavy metal songs, filled with the raw power and vocal acrobatics that these three maestros have made their careers upon. Three singers together on each track, pushing the human limits to create 12 brand new, timeless metal classics.