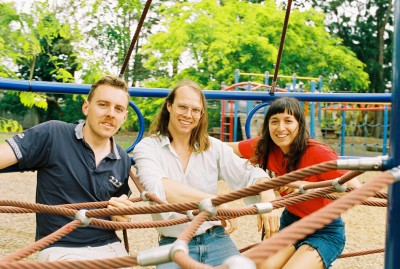 DSP Shows presents The Beths Live in the 9th Ward

New Zealand’s purveyors of high-energy guitar pop, The Beths, channel their friendships into high-energy guitar pop with a smart lyrical bite. Guitarist, lead vocalist and primary songwriter Elizabeth Stokes and guitarist Jonathan Pearce attended high school together, before meeting up with long-time mate, bassist Benjamin Sinclair, at the University of Auckland, where the three studied jazz. After gigging together in a variety of configurations, fellow jazz student and drummer Tristan Deck joined The Beths’ live line-up in 2019.
Their debut EP, 2016′s Warm Blood, overflows with explosive guitar riffs and infectious indie-rock hooks. Produced by Pearce and featuring all four members on joyful vocal harmonies that recall the best ‘60s pop, tracks like ace lead single Whatever and impossibly catchy stand-out Idea/Intent earned the all-killer, no- filler release rave reviews from the New Zealand music press. Warm Blood will be re-released via Carpark Records on April 26, 2019.
2018 was the breakout year for The Beths, beginning with a signing to Carpark Records and Dew Process. Their debut album, Future Me Hates Me, was heralded as one of the year’s stand-out music releases, receiving praise from a myriad of respected publications and earning worldwide radio airplay.
Pitchfork named it “one of the most impressive indie-rock debuts of the year” while Bandcamp hailed Future Me Hates Me “album of the summer”. Rolling Stone called Happy Unhappy ”Song of the Summer” and named The Beths their “Hot Band of 2018”. To date, the album has amassed over 3M streams and been included on a number of “best of 2018” lists, including Paste Magazine, NPR, Stereogum, UPROXX, ABC, PopMatters, the AV Club and the NZ Herald.
The Beths have also been named a finalist in the prestigious Taite Music Prize, nominated for New Zealand’s Best Album of the Year. The Beths have toured relentlessly on the back of Future Me Hates Me, getting audiences hooked on their ebullient sound. After selling out shows across Australia, New Zealand, North America, the UK and Europe in 2018, the band are proving to be one of the most in-demand live acts on the planet. The Beths kicked off their 2019 supporting Death Cab For Cutie on their UK/European tour, following in quick succession with a North American co-headline tour with Bad Bad Hats and an appearance at SXSW. The Beths will soon embark on two more headline UK/European tours, another headline North American run and an Australian headline tour before the year is out. They will also appear at major international festivals including The Great Escape, Pukkelpop, Green Man, Primavera Sound, Best Kept Secret, Pickathon, Ottawa Bluesfest and Splendour In The Grass.