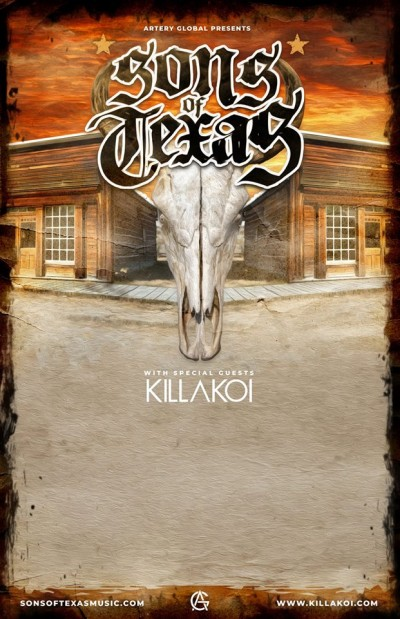 There is nothing subtle about Texas. There is a reason why we use the term “Texas-sized” to describe anything in life that’s exaggeratedly large, from posteriors, to bong hits, to jugs of beer. This boldness, naturally, extends to the Lone Star’s musical exports, loud n’ proud legendary artists like ZZ Top, Pantera, and Stevie Ray Vaughan, among many others. Now, firmly in that cocksure lineage, is a mighty bluesy metal band from McAllen, Texas aptly named, Sons Of Texas.

The young quintet’s debut, Baptized In The Rio Grande—produced by the iconic Josh Wilbur (Lamb Of God, Crowbar, Chiodos, Hatebreed)—is a Texas-sized portion of power metal grooves, dazzling guitar solos, strip joint/tailgate sing-along choruses, and soulfully charred vocal melodies. It took Wilbur 20 seconds of a YouTube clip to recognize this young band truly inherited the gonads of its Lone Star forefathers and sign on to work with the quintet.

“We’re proud of being a Texas hard rock band, that’s everything to us,” affirmsrhythm guitarist Jon Olivarez. “Texas is the biggest state, has a great history of football teams, and an astounding music legacy.”

Despite being just in their mid 20s, never having recorded an album, and having only existed for about a year, the guys play with seasoned authenticity and fiery brilliance. The guitar duo of Jon Olivarez and Jes De Hoyos boastthat classic rhythm and lead division of labor of Metallica’s Hetfield and Hammett, Testament’s Alex Sklonick and Eric Peterson, and Megadeth’s Dave Mustaine and Marty Friedman. Sons Of Texas has that rare gift of having a rhythm section of brothers—Nick and Mike Villarreal—so the grooves are telepathic and deeply in the pocket. And vocalist Mark Morales has a blood raw expressiveness evoking Phil Anselmo, Chris Cornell, and Zakk Wylde.

Baptized In The Rio Grande is an album for raising hell and enduring hard times. The record spans good old bad boy anthems like “Texas Trim” and “Baptized In The Rio Grande,” the stately ballad territory of the haunting “September,” and the dead end job-frustration of “Pull It And Fire.” The standout “Blameshift” showcases the guys have modern rock radio potential without sacrificing heft for hooks.

The past year has been a blessing for the Sons Of Texas. Inking a record deal and working with a producer of Wilbur’s caliber doesn’t happen for bands in the Rio Grande region of McAllen, Texas. Olivarez explains: “People always told us to move to Austin, but we stuck with our hometown and made something of ourselves. We take a lot of pride in being one of the first Valley bands to get these opportunities. “

Killakoi is a hard rock band from Charlotte, North Carolina. The band was formed in 2017. They went to record their debut EP "Pangea" in August with producer Sahaj Ticotin of Ra. They spent some time writing and working on perfecting a sound that was influenced by bands in diverse styles including grunge, metal, pop, and active rock. "Pangea" was finally released on June 2nd 2018.

The band is comprised of Jordan Mattacchione on vocals and guitar, Sam Ocheltree on Bass, Robbie Reimer on guitar and Michael Russo on drums. The three founding members, Jordan, Sam, and Robbie were students at one time in a "School of Rock" type of music school but decided to start there own and they now are instructors of performance band, studio engineering, percussion, guitar, and music business. They have all logged hundreds of live performances and either individually or collectively performed with some great touring bands including some of their own influences like Sevendust and Twelve Foot Ninja as well as other great bands including 10 Years, Highly Suspect, Nonpoint, Butcher Babies, Shamans Harvest, Trapt, Zack Myers of Shinedown, Otherwise, Like A Storm, and more.