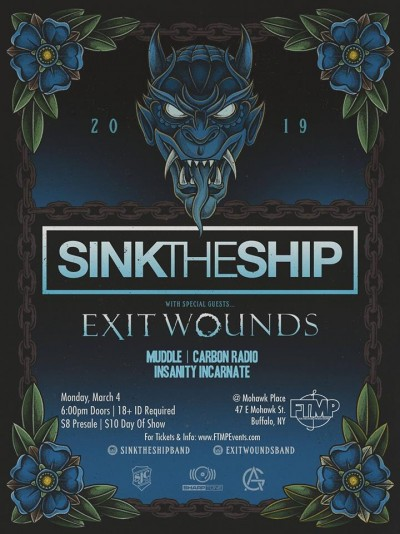 Just about anyone who has ever encountered adversity can tell you they have their own method of coping. Some people turn to their friends, some people turn to alcohol—or even more potent drugs of abuse—but despite the multitude of choices, almost everyone will tell you that when the going gets tough, they turn to music. Most people have that go-to album that lifts their spirits when they’re at their lowest, and with Sink the Ship’s forthcoming release, most people now have another release to bolster their mood. Taking classic, punchy and powerful easycore and infusing it win renewed energy and a penchant for heaviness, Sink the Ship’s name might sound like a downer, but their music is an upper more potent than any chemical money can buy.

Sink the Ship erupted into the underground heavy music scene with their energetic, bold and bright post-hardcore and pop-punk infused blend of metalcore in 2012—and since then, they've been sailing stronger and stronger with each passing year. Within two years' time, the band would release their debut effort, Reflections, a riveting—albeit rough around the edges—EP that spoke volumes to the band's dedication to creating music true to themselves and worth its weight in powerful, emotive passion. In the years since, Sink the Ship have played alongside bands from every nook and cranny of the heavy music spectrum, including The Plot in You, Iwrestledabearonce and the United Kingdom's Architects. 2018 sees the band preparing to unveil a masterful blend of melody, metallic aggression and brazen, bold honesty in the form of their debut full-length record in a partnership with SharpTone records. With tales of adversity, animosity and inspiration aplenty, Sink the Ship are a prominent, powerhouse of a band making monstrous waves in the coming year.