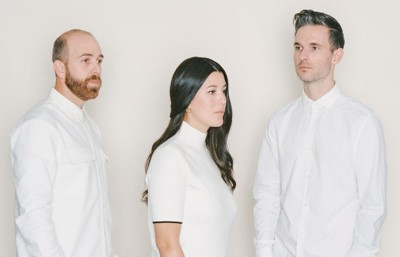 Long before Vancouver’s Said The Whale became a JUNO Award-winning, radio chart-topping indie rock band, it was an exploratory songwriting experiment led by high school friends Tyler Bancroft and Ben Worcester. Now, a decade since their 2007 formation, they have taken the project back to its freeform roots while simultaneously venturing forward into uncharted art-pop territory.

As Long As Your Eyes Are Wide is the group’s fifth album, and it was recorded amidst a period of turnover. Following the success of 2013’s hawaiii, which spawned the Canadian rock/alternative number 1 hit “I Love You,” bassist Nathan Shaw and longtime drummer Spencer Schoening both left the lineup. Now operating as a trio — with frontmen Tyler and Ben and keyboardist Jaycelyn Brown — the group briefly considered making separate solo records before ultimately deciding to enter the studio with no preconceptions and no concrete plan.

“It’s a return to how Tyler and I used to make music, which is just experimenting with anything and everything,” Ben remembers. “We started out using Casio keyboards and drumbeats on our computers, and then we turned into a rock band. This is a return to being free to make anything.”

Recording took place in various Vancouver studios, with We Are The City’s Cayne McKenzie serving as producer and helping to guide the record’s organic synth textures and unpredictable structures. Arrangements were chopped up until they became unrecognizable from their original form, scratch vocals were soaked in effects and used in the final mixes, and assorted song fragments were gutted and stitched together. The sessions were briefly interrupted by the birth of Tyler’s son, and Jaycelyn got married and had to record some of her parts while on honeymoon in Southeast Asia.

And yet, regardless of the piecemeal recording process, the result is the most focused album of Said The Whale’s career to date. The guitar strums that once formed the basis of the band’s music are almost completely absent, now replaced by thick bass grooves and shimmering electronic tones. “This is the most cohesive record we’ve ever made, between my songs and Ben’s songs,” Tyler says. “Musically, there was more collaboration than ever before.”

Previous Said The Whale records highlighted the contrast between Tyler’s eclectic rock influences and Ben’s salt-of-the-earth folksiness. Here, their styles become one: Ben-sung lead single “Step into the Darkness” rides a giddy drum loop towards its towering pop chorus, while Tyler’s “Confidence” sets soul-searching lyrics about the harsh realities of adulthood against a sublime backdrop of dance beats and deconstructed synth stabs. “Emily Rose” is an aching tribute to a friend who passed away in a car crash, and “Heaven” is a bittersweet eulogy propelled by swaggering blasts of electronic bass.

Despite the album’s many adventurous sonic forays, it remains true to the spirit of Said The Whale’s classic work. At its core, As Long As Your Eyes Are Wide is a singer-songwriter record, guided by introspective lyrics and alchemical group harmonies from Ben, Tyler and Jaycelyn. “This is our most personal, earnest record for sure,” Tyler says. “Even the upbeat songs are lamenting and sad.”

After so much change and uncertainty in recent years, Said The Whale has emerged as a unified force. While some listeners are bound to see the overhauled sound as a reinvention, it’s really just the latest step forward. They’ve evolved, but the DNA is the same, and the group’s musical partnership is more fruitful than ever.

Buffalo, NY-based alternative band Mom Said No has sprinted out of the garage and set its sights on the national stage. While some of the group’s members are still in their teens, Mom Said No has already perfected its own brand of high-energy, dramatic, and tuneful pop. With the vocal harmonic influences from The Beach Boys to the high energetic performances of James Brown and the pop sensibilities of The Cars, Mom Said No is truly an experience of its own.

Composed of members Elliott Hunt (vocals and guitar); Tim Jackson (vocals); Ben Mac (bass and vocals); Aaron Schapiro (guitar and keyboards); and Chris Lillis (keyboard and vocals), and his brother Mike Lillis (Drummer) Mom Said No has shared the stage with such touring acts as Young Empire, Lawrence, Walker Lukens and others. Mom Said No has been showcased at national music festivals including Music Is Art (Buffalo, NY) and Xpress Music Festival (Morgantown, WV).
​
As the band prepares to return to the studio to follow up its EP with a full-length recording, touring dates are being scheduled and a push to internet radio is being planned.