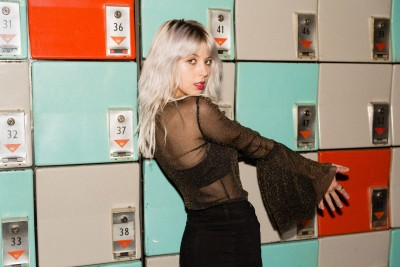 This record is kind of about writing a record,” Mikaela Davis says. The 26-year-old is home in her native Rochester, New York, reflecting on Delivery, her highly anticipated full-length album, as well as the hard journey the classically trained, defiantly original harpist had to travel to become the writer, performer, and band leader she was meant to be.

A joyride that pulls from folk rock, 70s and 80s pop experimentation, and muscly funk, Delivery manages to be both daring and comfortable, full of not just risks, but hooks.

Mikaela’s unconventional path to working singer-songwriter began before high school. With plans to join a symphony, she studied the harp in college, but halfway through, she decided the traditional harpist’s path wasn’t for her. She longed to perform her own compositions rather than pieces written by others in an orchestral setting. Following graduation, Mikaela moved to Brooklyn, following in the footsteps of indie artists who’ve come before her. But in the city, she could never quite find her footing. She kept busy, toured, and recorded an album that would eventually be shelved. Feeling confused and alone, she retreated back to Rochester, unsure of her next move.

Then, the last place Mikaela wanted to be saved her. Rochester’s artistic community embraced her, and Rochester became Mikaela’s sanctuary.