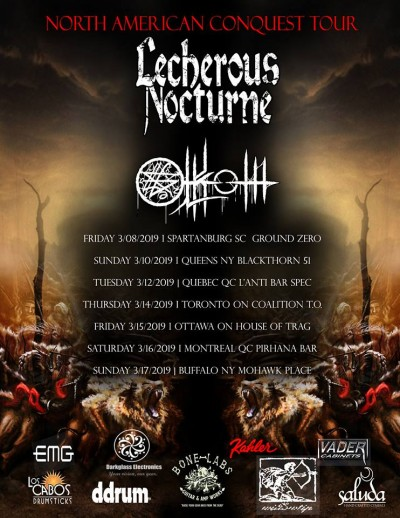 "Since their debut in 1997, Lecherous Nocturne have pushed the boundaries of death metal to extreme limits and even crossed the threshold through the blackened spectrum, abolishing any limitations some may confine to most technical subgenres. Conventional song structures and solos are void in their songwriting, with only the drive of leaving a ferocious trail of technical viciousness in their wake. The strength of their self-titled E.P. landed the band a two album deal with Unique Leader Records, which was followed by a series of nationwide tours with the biggest names in the genre. After touring on “Behold Almighty Doctrine,” the group inked a deal with Willowtip Records and has since released their highly acclaimed 2018 record “Occultaclysmic.”
“Occultaclysmic could very well be one of the year’s best technical death metal records.” -Decibel Magazine