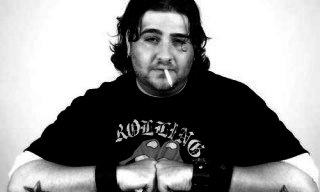 Big Jay Oakerson has been flooring audiences with true tales of odd threesomes and bizarre sexual encounters. "An American Storyteller," recorded at Stand-Up New York, is an one-hour onslaught of unbridled awesomeness and raunchy rock n' roll hilarity. Only a seven year veteran, a youngling in the world of stand-up, Jay has already performed at two of the most prestigious festivals in the business: the Just for Laughs Comedy Festival in Montreal, and the HBO U.S. Comedy Arts Festival in Aspen, CO. Jay has also made numerous television appearances including Comedy Central's Premium Blend and Tough Crowd with Colin Quinn, multiple appearances on B.E.T's Comic View, P. Diddy's Bad Boys of Comedy on HBO, and much more. Jay can also be seen hosting Movies On TAP with one of his personal favorite comedians Patrice Oneal, which airs on Spike TV. Jay's quick rise through ranks of the industry is attributed, he says, to good mentorship, "You have to study the best if you want to become the best." With a laid back, likeable, yet biting style, "Big Jay" is sure to bring big laughs for years to come.