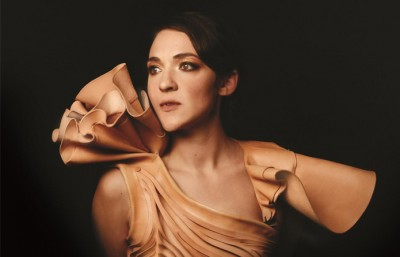 North Carolina bred, Brooklyn based singer/composer/multi-instrumentalist Becca Stevens has already received copious praise from the likes of The New York Times, describing her as a best-kept secret and impressively absorbing. Drawing upon elements of pop, indie-rock, jazz, and traditional Appalachian folk, Stevens has been hailed for her unique ability to craft exquisite compositions both for her own band, and for artists who run the gamut of genre from the legendary David Crosby, to singer José James to classical pianist Timo Andres. Stevens has toured the world with her band and collaborated with the likes of: Brad Mehldau, Esperanza Spalding, Billy Childs, Ambrose Akinmusire, Jacob Collier, Vijay Iyer and many others. In April 2015, Perfect Animal, the highly anticipated follow up to Weightless (Sunnyside), produced by engineer Scott Solter was released on Universal Music Classics. Becca’s music is featured on the latest Snarky Puppy Family Dinner Vol 2.

Becca will release her new album Regina in March 2017 Featuring Laura Mvula, Jacob Collier, David Crosby and produced by Troy Miller (Gregory Porter, Laura Mvula,Amy Winehouse) and Co produced by Michael League of Snarky Puppy. Regina is a tribute to strong women and figures in literature, history and legend as well as her personal life (Ophelia, Venus, Elizabeth I, her Grandmother); various songs inspired by the regal and divine nature surrounding that word as well as Regina as a voice, like a trusted friend or an alter ego. Becca uses Regina as a muse or alter ego to write in a new way fearlessly mixing genres, pop, folk, rock, Jazz funk and much more! The innovative Japanese designer Koshiro Ebata (Lady Gaga, Dior, Louis Vuitton) designs the look for her album and videos. This is the first album under Becca Stevens rather than Becca Stevens Band and marks a clear new direction in cementing her career as one of the most important, authentic and talented singer songwriters of a generation.

Broca’s Area is a four piece future soul band based out of Hartford, Connecticut that is a unique blend of hip-hop, R&B, and soul music. Pushing the envelope of these styles towards jazz gives you the multi-dimensional, polyrhythmic band that is Broca’s Area. Serving their audiences with their soulful lead singer (Mary Corso) who delivers warm breathy vocals reminding you of the classic school of neo-soul. The core band arrangements are a keyboards-bass-drum trio that’s bringing tight grooves influenced by the Blue Note catalog. Broca’s Area serves its audiences with high energetic performances of original compositions and unique covers honoring some of the greats from J Dilla to Jill Scott. This is what makes Broca’s Area diverse and multi-dimensional. Broca’s Area has shared the stage with bands such as Mad Satta, West End Blend, Mammal Dap, Kenny Hamber Revue, Funky Dawgz Brass Band, Midnight Snack and many other artists in the scene.