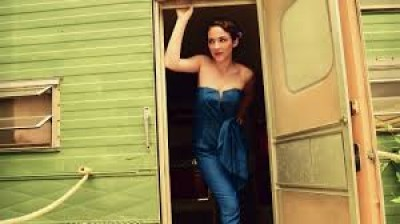 "I wanted to use the word ‘animal’ in the album title, because writing and recording this set of songs was like taming something that had a life of its own," Becca Stevens says of her revelatory new album Perfect Animal (11.04.14). ”The title came from the track ‘Imperfect Animals’ which I wrote about the instinct to strive for perfection pulling against the understanding that such a condition is not humanly possible. That’s a big theme for me, and it’s something that I go through in my daily life, in my relationships, and every time I write a song.”

Perfect Animal marks a quantum musical leap for the North Carolina-bred, New York-based artist. It boasts her most personally-charged songwriting and her most urgent, impassioned singing to date, along with vivid, adventurous arrangements that show off her fiercely expressive guitar work as well as the talents of her longstanding band: keyboardist/accordionist Liam Robinson and bassist Chris Tordini, both of whom Stevens has worked with since 2005, and drummer/percussionist Jordan Perlson, who joined three years later.

Although Perfect Animal was recorded in five different studios in three states, with Stevens and band recording with producer Scott Solter (renowned for his work with the likes of St. Vincent, Spoon, and the Mountain Goats), the album’s seamless intensity remains consistent throughout. “That same push and pull that defines ‘Imperfect Animals’ helped me make this album what it is,” she explains. ”It wasn’t a quick, easy birth; it was a long labor of love. We worked on it for over a year, recording in different places and putting all the pieces together as they came. This was the first time that I was really hands-on with the technical side of making a record. I handled a lot of the editing myself which was grueling at times, but it was also extremely rewarding, as I learned a ton, and I can truthfully say that at the end, even after knowing every track inside out I’m not tired of it, I still love it, and I’m very proud of every single piece.”