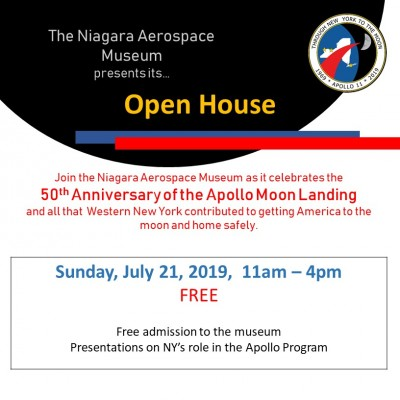 The Niagara Aerospace Museum will host an Apollo Party followed by an open house the weekend of July 20-21, 2019, in celebration of the 50th anniversary of the Apollo Moon Landing and Western New York’s contributions to getting America to the moon and home again safely.

The Apollo Party will be a family-friendly event running from 11am to 4pm on Saturday, July 20 and will feature interactive and space themed activities for kids and adults, presentations about WNY’s contributions to the Apollo mission, photo ops, museum tours, and a Tang Toast to commemorate the moment of moon landing.  Guest can operate a Lunar Landing Module simulator, take a tour of the night sky in an indoor planetarium dome, and speak to aerospace experts. Prizes will be awarded to party-goers wearing the best moon landing inspired costumes. The museum welcomes guests with first hand remembrances of the Apollo Program or moon landing to contribute stories, pictures, or artifacts to the museum.  The following day, Sunday, July 21, the museum will host an open house with free admission to the museum and an extended, technical presentation about WNY’s role in Apollo 11.

New York State, including the Western New York Area, made key technological contributions to NASA and the Apollo Program which made the moon landing possible.  Those contributions, such as the Lunar Module Ascent Engine, will be highlighted and displayed at the museum during the Apollo Party.

This party is part of the museum’s ongoing mission to preserve and promote Western New York’s aviation and aerospace history.  More information about the museum, the Apollo Party, or the open house is available on Facebook and at the museum’s website, NiagaraAerospaceMuseum.org.  The Open House is free of charge.