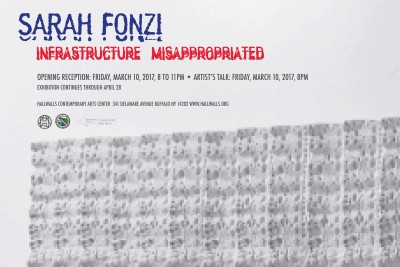 Sarah Fonzi is a Buffalo based sculptor and designer. Frequently drawing upon common building materials such as plaster and metal, Fonzi borrows imagery from diverse sources such as ornament, architectural details, and various everyday objects but tends to skew these sources and their appearance through specific reworkings of material. For her exhibition at Hallwalls, she will be working on a new, site-specific installation that draws upon and extends her sculptural explorations, playing with form, material, and scale.

In Renée Lear's Every Shot from Dziga Vertov's Man with a Movie Camera as an Animated GIF, Vertov's pioneering film Man with a Movie Camera is meticulously reorganized and reconfigured spatially as a series of animated GIF montages, projected large scale. One complete viewing of the GIF montages runs well over three hours—far exceeding the length of its source—contains every shot in the film, edit for edit, offering viewers an alternate way to experience this revolutionary film.