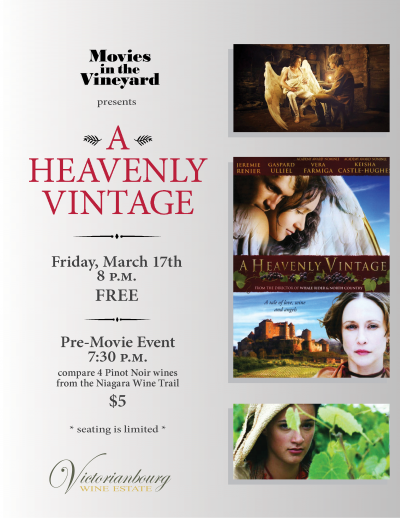 A Tale of Love, Wine and Angels

Our March Free Movie:
Our next free Movie in the Vineyard is A Heavenly Vintage (2009).
In the words of film critic James vanMaanen:

“Every so often — but not nearly often enough — a film comes along that is so different and, in its way amazing; so rich and odd and emotionally resonant and yet, really rather simple; that deals with subjects dear to your heart: love and sex (both hetero and homo), history, work, family and… wine! that you think to yourself when the film is finished, “This is why they invented movies.”” *

The film beautifully depicts the struggles of love, belief, and the pursuit of the perfect vintage. In particular the film provides a superb depiction of the challenges of winemaking and some of the obstacles that can arise. The plot of the film centers around winemaker Sobran Jodeau (played by Jérémie Renier), and depicts his life journey from vineyard worker to winemaker. Throughout Sobran’s journey he is aided by an angel, whose relationship with Sobran grows and develops throughout the film. The film’s breathtaking shots of vineyards, wine production, and the Chateau further enriches the viewing experience.

**NB: This film is RATED R for its depictions of sex and sexuality. For individuals who are offended by this kind of subject matter, or are under the age of 17, we STRONGLY suggest skipping this screening.**

More on the Movie:
The film was an adaptation of the novel The Vintner’s Luck by Elizabeth Knox. After viewing the film Knox was unhappy with how much the relationship between winemaker Sobran and the angle had been “diluted”, and therefore did not allow the title of the film to be The Vintner’s Luck, which is why the film is now titled A Heavenly Vintage.
*Mr. vanMaanen’s full review is available at :
https://trustmovies.blogspot.com/2012/05/niki-caros-vintners-luck-now-called.html

The movie is free, but for even more fun and excitement come to our pre-screening party. One significant aspect of the film is the ability to “taste the winemaker” in the wine. With this in mind we designed a wine tasting where you will get the chance to compare to compare 4 Pinot Noirs from the Niagara wine trail (one of which will be ours) and taste how each winemaker’s wine style is reflected in their Pinot. Tickets to attend the pre-screening party are $5.

About Movies in the Vineyard:

Our Movies in the Vineyard series is a must see! For all of our customers who love wine just as much as we do we have created a movie series where each film showcases breathtaking vineyards, wineries, and of course wine! Relax and unwind as you escape into the on-screen world of wine and winemaking. Glasses and bottles of wine will be available for purchase so you can sip along with the characters in each film. Furthermore, the series covers a wide variety of genres ranging from horror to romance to comedy, so there is something for everyone. The best part is the screenings are free and all are welcome to attend! As a kick off to each film we will be hosting a pre-screening party where snacks and wine will be available. We hope you can make it!

**NB: March’s screening will take place inside the tasting room so there will be limited seating. We highly recommend calling and reserving you spot ahead of time to guarantee your spot for A Heavenly Vintage by calling the winery at 716-751-6576 or emailing chelsea@victorianbourg.com**