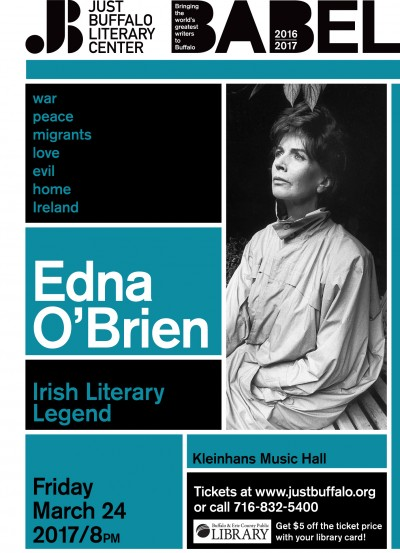 Philip Roth has said O’Brien is “the most gifted woman now writing in English” and has declared her most recent novel, The Little Red Chairs, her “masterpiece.” Past BABEL author Colum McCann has described O’Brien as “the advance scout for the Irish imagination for over half a century.” Given the lineage of Irish literature in the 20th century—Joyce, Beckett, O’Brien —that is no small compliment. O’Brien has hinted that her talk will be about “Why Literature Matters” and will be discussing William Faulkner, James Joyce, and Emily Dickinson among other luminaries who have been important to shaping her own writing practice.

Ms. O’Brien is very excited to visit Buffalo as the home to the world-renowned holdings of The Jame Joyce Archive at the University at Buffalo as well as the Finnegans Wake reading group & upcoming events such as the Emily Dickinson marathon reading on April 22nd.

O'Brien's visit coincides with Women’s History Month and O’Brien is certainly a feminist forerunner. Her novel, The Country Girls, was widely-acclaimed as well as banned upon its release in 1960 for its frank depiction of two women’s sex lives. However, cultural norms shift as time passes. In September of 2015, O’Brien was honored as a Saoithe of Aosdána, Ireland’s highest literary accolade. Irish President Michael D. Higgins went on record apologizing for the scorn often heaped on O’Brien by her native land, and the banning of her books.