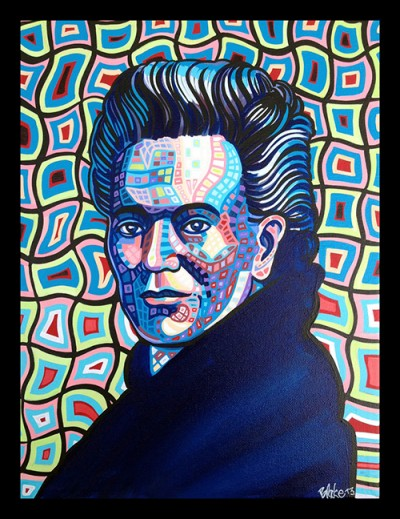 In celebration of Women's History Month, artwork by Blake Chamberlain will be on display in the Park's Visitor Center Second Floor Art Exhibit room. His exhibit "Social Visionaries Re-imagined" will be on view Friday - Sunday 9:00am - 5:00pm throughout the month of March.

Artist Bio: Blake Chamberlain is from the Finger Lakes region of New York State, and currently resides in the Seattle metro area. He has been painting for most of his life, developing a unique, bold style that ranges from representational to surreal. He is known for a style of portraiture that utilizes areas of flat color or combines elements of intricate line, pattern, and geometric abstraction to comprise the facial structure of the subject.

In 2013 he began the portrait series Social Visionaries Re-Imagined which initiated with his lifelong fascination with the rich history of his hometown, Auburn, NY, and greater central New York State. This series surveys important historical figures who worked for social change and challenged social norms such as gender expectations and racial inequality in New York State during the 19th and early 20th centuries. The series was recently expanded with guidance from Lisa Webster-Bowes, as part of her post-graduate dissertation "Social Visionaries Re-imag[in]ed" which highlights the lives of those portrayed with academic essays. A book compiling this work is currently in the works.

Overall, Chamberlain's work is energetic and colorful. He is inspired by history, popular culture, literature, and the whims of his imagination.

His work is included in private collections nationwide as well as internationally.

These selected works from the Social Visionaries Re-imagined series portray local historical women and are intended to encourage the audience to view the subjects in a fresh way. Based in central New York State (Auburn, Seneca Falls, Rochester, and Syracuse) their influence as champions of social justice and challenging accepted gender norms is far-reaching and still very much relevant.

There have been times when I've been personally reminded that viewing the familiar from an outsider's perspective can be a valuable experience. With that spirit in mind, I painted this series in a non-traditional style. The faces are built with instinctual shapes of flat color, accentuated by carefully chosen side-by-side color relationships which help to build tone with simultaneous contrast. The tones are then layered with abstract shapes and lines, anchored by dark lines locating major facial features. Though the subjects are representational and recognizable, the effect of this style is to force viewers to consider the subjects for an extended time as the eye goes deep into layers of abstraction, to again find the portrait. This institutes an appropriate pause for contemplation.

I hope that within this pause the viewer will consider the bravery and will of each figure, and the fact that in the 19th century their efforts towards human rights and equality were fought against the tide of society.