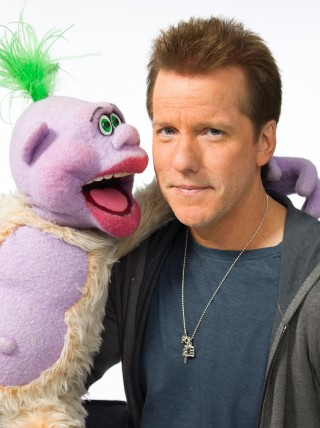 The nation’s number one comedian Jeff Dunham and his beloved cast of characters announce the kick-off of the fall leg of their 2013 “Disorderly Conduct” worldwide tour. The international concert series began on October 23rd in Canada and returned to the states on October 27th.

Fans all over the world can look forward to a new jam packed show with more laughs than ever before. Dunham’s famed troupe of sidekicks are back: Walter the Grumpy Retiree, Achmed the Dead Terrorist, the beer-fueled redneck Bubba J, the manic purple creature Peanut, the spicy pepper from south of the border José Jalapeño, and Peanut’s own ventriloquist dummy Little Jeff, a mini-version of the ringmaster himself.
Jeff just launched a brand new computer and mobile game based off the classic Minesweeper called Achmed’s Bombsweeper. Achmed’s Bombsweeper challenges players to compete against the clock to solve five levels of the game, before Achmed creates the RoboAchmed terror weapon destroying the world. The game is available on Jeff’s website and in the Android and iTunes store and is totally free.
Dunham and his comedic sidekicks most recent Comedy Central one hour special entitled “Minding the Monsters,” is the fifth in a string of record breaking specials. It debuted on Comedy Central to 7.5 million viewers, making it the most watched special of the year for the network. Upon its release on DVD, it was the #1 comedy DVD on Amazon.com and exceeded platinum sales within 6 days. It has already reached triple platinum status.

The amazing rise of Jeff Dunham continues apace, with 2013 having seen Jeff continue to pack arena-sized venues. Dunham and his sidekicks are preparing for their fifth trip to Europe this fall, stopping in Scandinavia, Belgium, the Netherlands, and Iceland.

Outside of the tour, fans will soon get the chance to see Achmed the Dead Terrorist like he's never been seen before! Jeff Dunham will be premiering his very first animated feature “Achmed Saves America,” starring the world’s most beloved, failed bad-guy! In this full length animated movie, Achmed is having a very bad day... After accidentally blowing himself up, the world's most incompetent suicide bomber finds himself whisked away from his homeland by a giant bald eagle and dropped off in... Americaville, USA. There, mistaken by the kind-hearted Wilson family for a visiting French exchange student, "The Little Skeleton That Couldn't" bumblingly plots to destroy the town and all of its "infidels". But, once he's exposed to the sweet things in life -- including all-you-can-eat buffets and frozen yogurt -- Achmed's campaign of hate turns into a patriotic All-American lovefest.

The phenomenal international success of Dunham and his cohorts have been driven by his Comedy Central specials, which set global records for both ratings and sales. Dunham’s 4th Comedy Central TV special “Controlled Chaos,” premiered to a staggering 8.3 million viewers overall. The global TV event enjoyed a never-before simultaneous same day worldwide debut in a dozen countries. Dunham continued to break ratings records at the end of 2011, when The Bio Channel’s premiere of Jeff Dunham: “Birth of a Dummy” became the network’s top rated telecast ever.

No wonder The New York Times Magazine declared Jeff Dunham “the most successful comedian working in America.” Dunham was recently named Pollstar’s #1 Comedy Tour in North America for three years running as well as their Top Worldwide Tour for two years in a row.