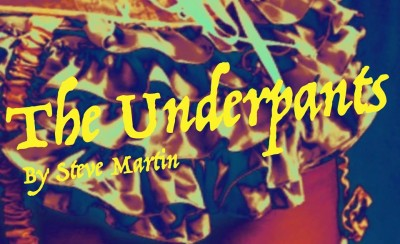 Theobald Maske has an unusual problem: his wife's underpants won't stay on. One Sunday morning they fall to her ankles right in the middle of town--a public scandal! Mortified, Theo swears to keep her at home until she can find some less unruly undies. Amid this chaos he's trying to rent a room in their flat. The prospective lodgers have some underlying surprises of their own.

The original work DIE HOSE, penned by Sternheim, takes a strong look at the snobbish and repressive mindset of the bourgeois in 1910 Germany. The piece was so poignant that later in his career  this work and much of Sternheims works were banned by the Nazis due to to disruptive comic reflection of German culture and society. Under Steve Martins contemporary comedic insight, in his adaptation he adds the right amount of Martins trademark hilarity to this farcical tale. As seen in the ART/WNY production of Martins PICASSO AT LAPINE AGILE, THE UNDERPANTS certainly will see a fair-share of the humor and comedic timing that is classic Steve Martin.

David C Mitchell will return to ART/WNY as the stodgy Theobald Maske who is trying to overcome the public scandal of his wifes, Louise (portrayed by the talented and ART/WNY alumni Candice Kogut), inability to keep her undergarments unexposed  when the King passes by.  THE UNDERPANTS also features an assortment of characters including the enamored (read: horny) team of 'Frank Versati' played by Ben Caldwell (last seen in AMERICAN IDIOT), and 'Benjamin Cohen', played by Rich Kraemer (last seen in BBAJ). Pam Mangus (ART/WNY productions include FLOYD COLLINS) will also make her return to the ART stage as the upstairs neighbor 'Gertrude Deuter' and rounding off the cast as 'Klinglehoff' is the multi-talented, Michael Starzynski.

Tickets are $20 general admission and $15 for military veterans and students,  Visit www.artofwny.org or call 716-697-0837 for ticket details and information of Subscribers Night.