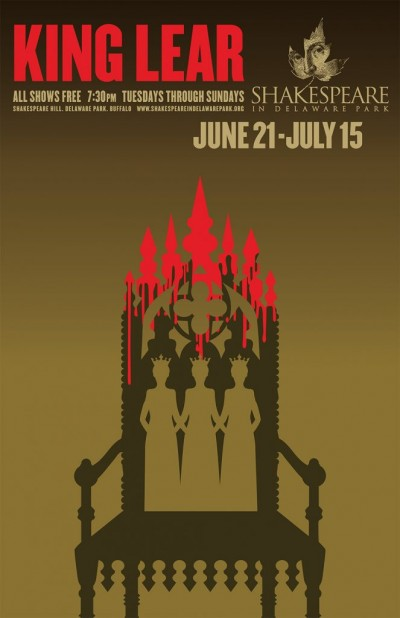 A Unique Buffalo Outdoor Theater Experience. Free For Everyone.

Lear, King of England, decides to give up the throne and divide his kingdom between his three daughters, Goneril, Regan, and Cordelia. Before he divides the country, he asks each of his daughters to tell him how much she loves him. The two older daughters flatter Lear, but when Cordelia refuses to make a public declaration of love for her father, she is disinherited. She marries the King of France, who accepts her without a dowry. The other two daughters, Goneril and Regan, and their husbands, the Dukes of Albany and Cornwall, inherit the kingdom.

The Earl of Gloucester, deceived by his illegitimate son Edmund, disinherits his legitimate son, Edgar. Edgar is forced to go into disguise as a mad beggar to save his life. Lear, now without power, quarrels with his daughters, Goneril and Regan, when they refuse to accept Lear with his retainers. He leaves in a rage to live in a wasteland as it storms. He is accompanied only by his Fool and by his former advisor, the banished Earl of Kent, who is now disguised as a servant.

Lear, Kent, and the Fool encounter Edgar, Gloucester’s legitimate son, who is still in disguise as a mad beggar. Gloucester tries to help Lear, but is betrayed by his illegitimate son Edmund and captured by Lear’s daughter Regan and her husband, Cornwall. They put out Gloucester’s eyes and make Edmund the Earl in his father’s place.

Lear is taken secretly to the port town of Dover, where Cordelia has landed with a French army to rescue her father. There, Lear and Cordelia are reconciled but in the ensuing battle are captured by the sisters’ combined forces. Goneril and Regan are both in love with Edmund, who commanded their forces in the battle. Discovering this, Goneril’s husband, Albany, forces Edmund to defend himself against the charge of treachery. Edgar arrives, disguised as an anonymous knight. He challenges Edmund to a trial by combat, and fatally wounds his brother. News comes that Goneril has poisoned her sister Regan and then committed suicide. Before dying, Edmund reveals that he has ordered the deaths of Lear and Cordelia. Soldiers are sent to rescue them, but arrive too late: Cordelia has been killed. Lear enters carrying her body, and then dies. Albany agrees to give the throne to Edgar.

This is a FREE summer festival that gladly accept free-will donations.