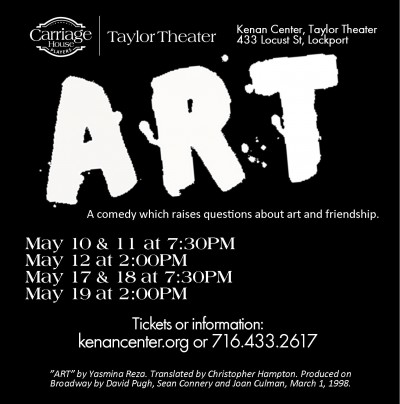 The Carriage House Players, in collaboration with the Kenan Center present Yasmina Reza’s Tony-award winning comedy, “Art”.  Performances will take place in the Taylor Theater, Friday through Sunday May 10 through 19th, with performances on Fridays and Saturdays at 7:30 PM, and Sunday matinees at 2:00 PM. The Taylor Theater is located on the campus of the Kenan Center at 433 Locust Street in Lockport, NY.

The comedy, which raises questions about art and friendship, concerns three long-time friends, Serge, Marc, and Yvan. Serge, indulging his penchant for modern art, buys a large, expensive, and completely white painting. His friend Marc is horrified, and their relationship suffers considerable strain as a result of their differing opinions about what constitutes "art". Yvan, caught in the middle of the conflict, tries to please and mollify both of them.

Written by French playwright, Yasmina Riza, “Art” has had successful runs in Paris, London, and on Broadway, earning multiple awards along the way including the Tony Award for Best Play, Laurence Olivier Award for Best New Comedy, and the Moliere Award for Best Commercial Production.

The Carriage House cast features Elliot Fox as Yvan, Alex Rubin as Serge and Russell Holt as Marc.  All three actors have performed in theaters across the region and beyond.  Director Betsy Bittar returns to the Taylor Theater after having directed “Candid Conversations” last June and has also performed as an actor in a variety of plays, both at the Taylor Theater and with other Western New York companies.

Included in the Carriage House Players production will be original music from “The Secret Life of Insects”, featuring saxophonist Kelly Bucheger, who has led and performed with various groups in the Jazz at the Taylor series. The group includes Doug Dreishspoon on drums and Marc Cousins on bass.  John Shera, whose paintings and etchings have been featured in numerous galleries, has created the controversial white painting.  On May 11th, there will be a talk-back following the performance featuring the actors and other artists involved in the production.

Individual tickets are $15 for Kenan Center members and $20 for the general public. Tickets for students 18 and under or with valid college I.D. are available for $10.  All may be purchased online at kenancenter.org, in person at the Kenan Center Business Office, or charged by phone at 716-433-2617. Because seating is limited, advance tickets are recommended.