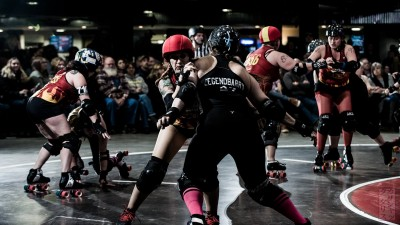 For the second year in a row, it’s red versus black in this year’s QCRG playoff game! During the home team playoffs, the 2nd and 3rd ranked home teams square off for a shot at the QCRG Cup Championship! Head to Buffalo Riverworks on Friday, May 18 at 7PM to watch the Suicidal Saucies and Devil Dollies battle it out for a spot in the QCRG championship game against the Alley Kats on June 1st! Both teams are determined to secure a victory to take one step closer to becoming the coveted QCRG cup champions of the 2018 season.

This will be the Dollies’ and Saucies’ fifth game of the year, and their third time facing each other on the track. In their first matchup of the season, the Dollies won in a close game with a final score of 217-229. The second game, however, the Saucies came back with a 142-187 win. This game will not only decide which team will make it to the home team championship game on June 1st, but it will prove which team is stronger this season.  This is one bout you don’t want to miss!

Tickets are $15 general admission or $20 for prime-time front-row seating and can be purchased at the door or in advance at https://www.qcrg.net/tickets/. So grab your family and friends and head out to Buffalo Riverworks on May 18 to cheer on your favorite Buffalo Roller Derby girls!

The Queen City Roller Girls (QCRG) have had their home in WNY for eleven years and are in their 12th season. The 2018 year will be their fourth season at Buffalo Riverworks. QCRG has five teams: The internationally ranked (#23) Lake Effect Furies, the B-level travel team the Subzero Sirens, and three house teams: the Alley Kats, the Devil Dollies, and the Suicidal Saucies, with over 70 skaters ranging in ages from 18 to 50.  QCRG is an all-volunteer run organization supporting WNY charities at every game.

QCRG is a member of the Women’s Flat Track Derby Association (WFTDA) which has over 1,000 member leagues on every continent. Roller derby is one of the fastest growing sports in the world, as well as one of two full-contact sports for women (the other one is rugby).