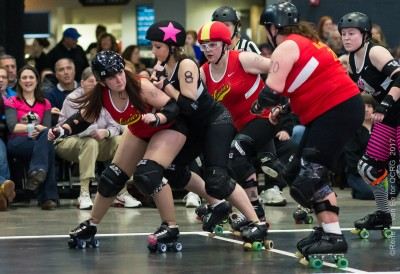 Looking to add a little spice to your Saturday afternoon? Come check out the Suicidal Saucies' first matchup of the year against the Devil Dollies at 7PM on January 26 at Buffalo Riverworks. Battling it out for what each side hopes to be their first season win, these two QCRG home teams will keep your eyes glued to the track with their quick feet, powerful hits, and strategic moves.

The Suicidal Saucies head into the 2018 season with a seriously spiced up roster after adding some interesting flavors to their team recipe. Joining the mix this year are three brand new Queens Court graduates - rookies AlexSlamHer the Great, Jyn Hurtso, and Kyalu Ren. The Sauce have also taken on Bilbo Bruisins & Necromatrix - 2 home-team transfers that will rock red this season instead of purple. After helping the Kats claim the QCRG Cup for the first time since their inception, these two jammers made the switch over to the Saucies to hopefully take the Cup once again. Rounding out the team is Subzero Sirens player Anne-gry She-Hulk, who made her QCRG debut last year.

Returning to coach the Saucies this season are Blackrock Bruiser & Val du Morte. Rocky has brought her dominating style of play and saavy Lake Effect Furies strategies over to the Saucies and alongside Val du Morte, they hope to stir the Sauce to perfection. Team captains Beatrix Boom and Pearl have worked long and hard to blend the seasoned vets and fresh rookies to overtake the track.

After a loss to the Kats in the home team season opener, the Dollies are back and ready to take on their second game of the year with a new set of strategies and skills. You can expect to see jammers Jiffy Pop, Hebrew Hammer, Indianna Bones, and Michelle Angel rock the star in the hopes of tallying up enough points to overcome the Saucies.

The game will start at 7:00pm at Buffalo Riverworks, a local restaurant and sports complex with a roller derby rink built into their venue. The teams compete to allow their jammers (team members with a star on their helmet) to lap as many opponents as they can in order to accrue points. This contact sport is played entirely on quad-roller skates, and games consist of two 30 minute halves.

Tickets are now on sale at qcrg.net/tickets, for $15, or $20 for premier seating.

For more information about the 2018 Queen City Roller Girls season opener, contact Kathy Lisborg (aka Vile Love It) at PR@qcrg.net.