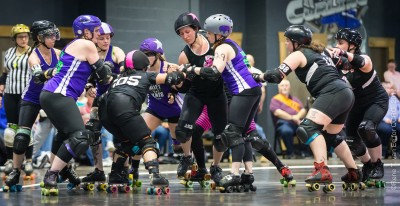 Buffalo’s local roller derby league, Queen City Roller Girls (QCRG), will be kicking off their first game of the 12th season at 7 p.m. on Friday, January 5th at Buffalo Riverworks. The Alley Kats, last year’s league champions, will be facing off against the 2017 runners up, the Devil Dollies, in a recreation of the 2017 season championship game.

The Alley Kats won the league cup last year for the first time since their inception in 2008. Determined to maintain the title of QCRG Cup Champs, the Kats are skating into this season with a new leadership team: Coach Knockin das Boots (a retired Kat), Assistant Coach Big Mac, and Bench Manager Bang GRRrang. When asked about her thoughts for this upcoming season, Boots shares "This team is like a family to me, and it’s great to be home” she continued, “Our opponents are especially formidable this year- each for their own reasons- so we focus on discipline and control and try to play the Best derby we can play.” After the retirement and transfer of 5 skaters, the 2018 captain and co-captain, PaulverizHer and Arti Choker, will lead the team into the season opener with a roster consisting of 6 brand new Kats: Ashzilla, Cassadee Dope, Daisy Juke, Kate McHitten, Mick Dagger, and Ubebee. These rookies were drafted from Queen’s Court, which consists of new league members who have never played on a team before, and the QCRG Junior league.

The Devil Dollies have also made some big changes to the team. With nearly half their skaters retiring at the end of the 2017 season, captain Lip Service and co-captain Onyx Overkill drafted 10 new skaters: Bae-do, Gill Doe, Hebrew Hammer, Indiana Bones, Jiffy Pop, Jinx e. Jones, Legendbarry, Mer-Maiden, Michelle Angel, and Stretch Harmstrong. The new teammates on the Dollies include a range of transfers from other roller derby leagues, former QCRG junior players, and Queen's Court players. The Dollies are also bringing on new leadership. Three players from QCRG’s internationally ranked WFTDA chartered team, the Lake Effect Furies, have joined together to co-coach the Dollies. Bricks Hit-House is returning as a coach, with Chickadeemolish and inSINerator starting this year. InSINerator has loved seeing each girl on the team grow and learn to work together. She notes, “to me teamwork is the beauty of our sport, where you have five acting as one. You become selfless.”

The game will start at 7:00pm at Buffalo Riverworks, a local restaurant and sports complex with a roller derby rink built into their venue. The teams compete to allow their jammers (team members with a star on their helmet) to lap as many opponents as they can in order to accrue points. This contact sport is played entirely on quad-roller skates, and games consist of two 30 minute halves.

Tickets are now on sale at qcrg.net/tickets, for $15, or $20 for premier seating.

For more information about the 2018 Queen City Roller Girls season opener, contact Kathy Lisborg (aka Vile Love It) at PR@qcrg.net.

The Queen City Roller Girls (QCRG) have had their home in WNY for eleven years and are entering their 12th season. QCRG has five teams:  The internationally ranked (#18) Lake Effect Furies, the B-level travel team the Subzero Sirens and three house teams: the Alley Kats, the Devil Dollies and the Suicidal Saucies.  With over 70 skaters ranging in ages from 19 to 50.  QCRG is an all-volunteer run organization supporting WNY charities at every game.

QCRG is a member of the Women’s Flat Track Derby Association (WFTDA) which has over 1000 member leagues on every continent in the world. Roller derby is one of the fastest growing sports in the world as well as one of two full contact sports for women (the other one is rugby).