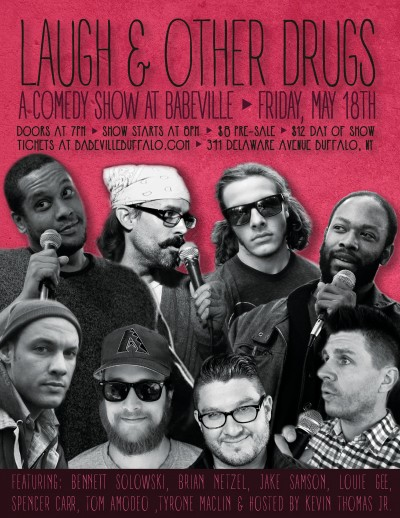 About “Laugh and Other Drugs”

“Laugh and Other Drugs” began over two years ago to showcase some of the area’s funniest comedians in the perfect local venue for stand-up comedy: The 9th Ward.  This bi-monthly show brings some of the best comedic talent from Buffalo and surrounding areas for a night of laughter.

Bennett Solowski: expect a laid back delivery, hilarious observations, and a beard.

Brian Netzel: the once host of the legendary Nietzsche’s “Rustbelt Comedy Showcase;” multi-talented, caveman-esque, mixes absurdity with reality to get the laughs

Jake Samson: new to the stage but has a knack for telling witty jokes; can be seen out most nights doing comedy

Tyrone Maclin: opened for Rachel Feinstein, Andrew Schulz, and JB Smoove at Helium Comedy Club; hilarious and engaging on the mic; don’t get him started about The Good Wife.

Louie Gee: regular host of Helium’s “Dirty Show,” accurately claims to be the only comic on the poster that doesn’t look like a bum.

Spencer Carr: Buffalo comedy’s #1 guest host; mixes high and low brow concepts; hilarious dude on or off stage; will drink your unfinished beer at the bar.